THE AMBITION OF THE TERRITORY - AWJGGRAUaDVVTAT

The Flemish Community, the Flemish Architecture Institute and the Flemish Government Architect's Team have pleasure in inviting you to the exhibition

THE AMBITION OF THE TERRITORY
AWJGGRAUaDVVTAT

'The Ambition of the Territory' is a call for a radical overhaul of the practices of architecture, planning andpolitics in Flanders and Europe. Our current prosperity and welfare systems are founded on the consumption of finite resources and a wasteful use of land. Instead 'The Ambition of the Territory' proposes regional and trans-national systems of land use, production and dwelling that are both integrated and complementary. Shifting the focus from consumption to the organisational potential of the urbanised territory of Europe itself, the project explores how the various uses of space can become part of a spatial metabolism. The future of Europe will be imagined on the basis of its shared territory, founded on its Common Ground.
Based on a close reading of the history of our productive landscape, 'The Ambition of the Territory' explores the conditions for a resilient society based on principles of self-reliance and responsibility.

'The Ambition of the Territory' is a project of the temporary association AWJGGRAUaDVVTAT, consisting of Architecture Workroom Brussels (BE), designers Studio Joost Grootens (NL), planners and architects GRAU (F), architects De Vylder Vinck Taillieu (BE) and artist Ante Timmermans (BE).

The Belgian Pavilion in Venice will be opened by Joke Schauvliege, Flemish Minister for Culture, on Tuesday, 28 August 2012 at 5:00 PM. The exhibition can be visited from 29 August to 25 November 2012.

'The Ambition of the Territory' will also be shown in Flanders. Opening at deSingel International Arts Campus in Antwerp on Thursday, 4 October 2012 at 8:00 PM. The exhibition can be visited from 5 October 2012 to 6 January 2013. 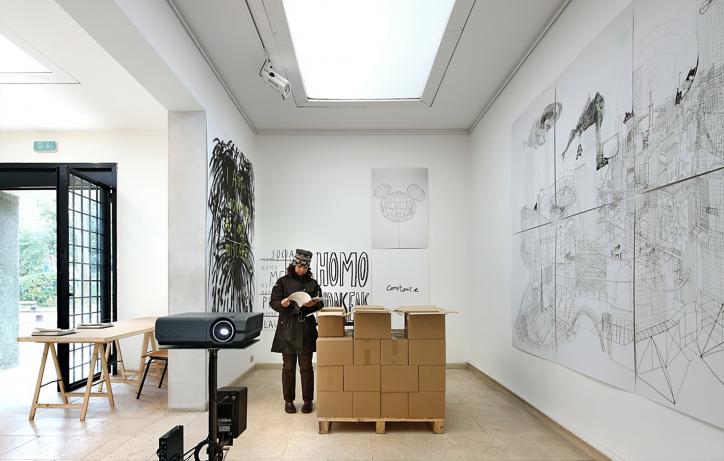