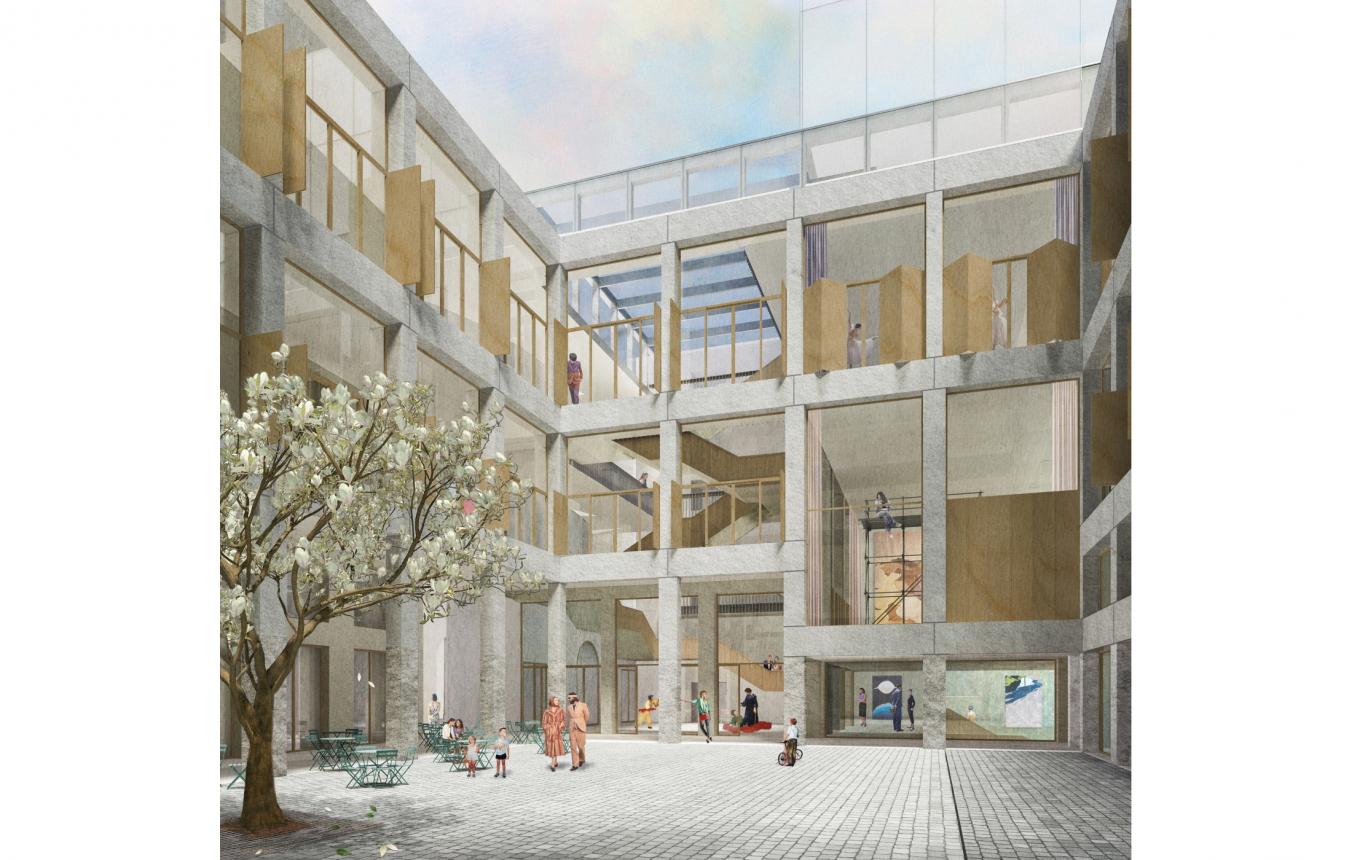 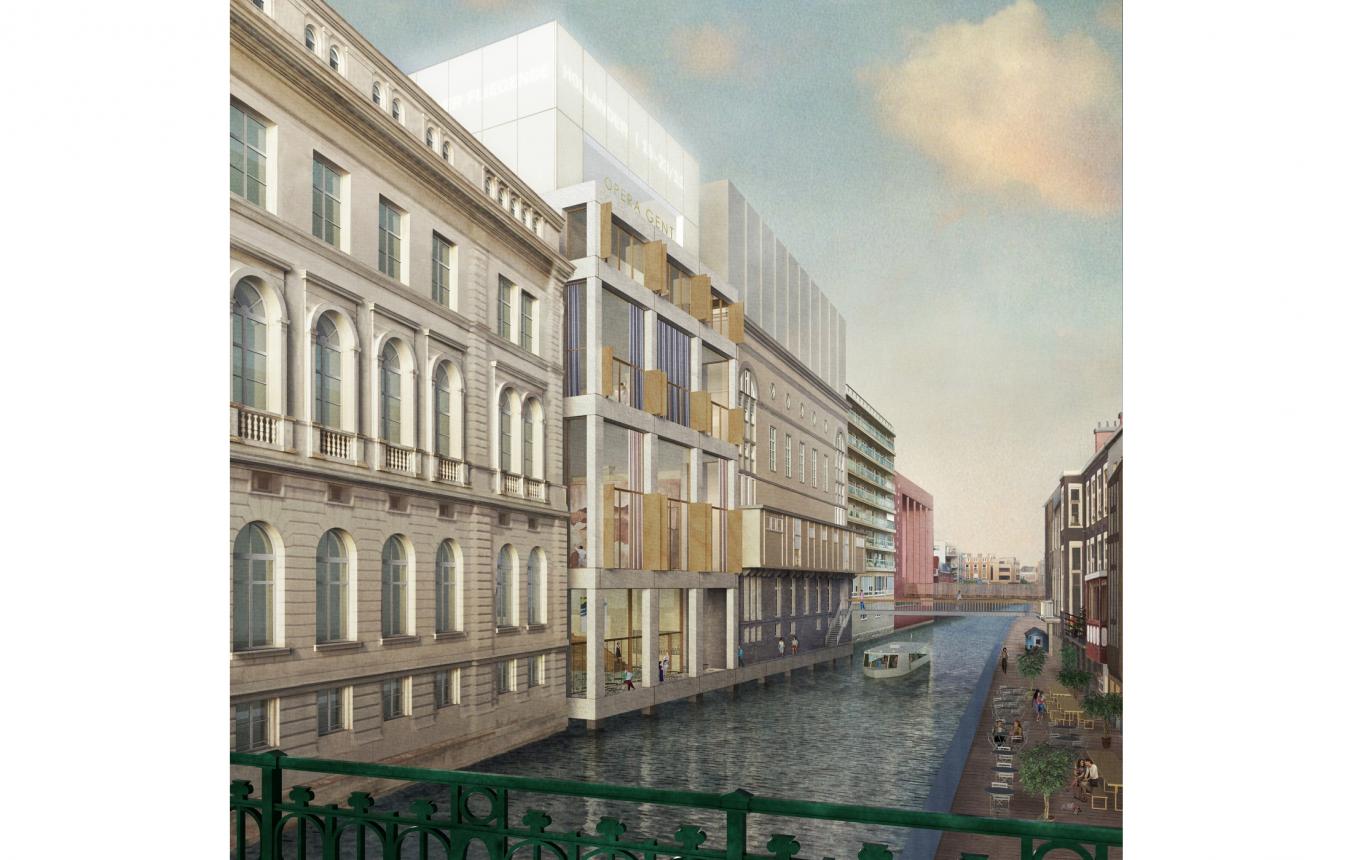 The study and design assignment for the implementation of the master plan for the Music and Performing Arts Centre and for the conditional realisation of the extension, renovation and restoration of the opera complex in Gentwerd, awarded to the temporary association BAS / Dirk Jaspaert, DRDH Architects Ltd.

The neo-classical opera house in Ghent, built in 1837-40 according to a design by architect Louis Roelandt, represents an important expansion. Today it is possible to add the adjoining, former post-telegraph office and peace court, which was built in 1910-13 under the direction of architect Charles Van Rysselberghe on the south side and on the Koophandelsplein, to the opera house. Opera Ballet Flanders saw this as a unique opportunity to commemorate the building so that it would become an open house with multiple uses. After all, a very important aspect of sustainability is making an existing infrastructure as playable as possible. Although the opera originally consisted of a spectacle hall and a suite of ballrooms, these ballrooms could no longer be used independently by third parties and the opera houses of Antwerp and Ghent are alternately underused.

DRDH architects from London developed a spatial vision that makes intelligent use of the pitted building block and creates a public square in the heart that refers to the historical origins of the site of the 'Sebastiaanshof'. The old, oval peristilium is rediscovered as the entrance to the entire opera site and to the new, glazed atrium. This atrium is a clear staircase that not only opens up the old ballrooms and the opera house, but also a new 'tower building' on the Ketelvaart. At the bottom of this building there is an extra hall, which overlooks the Ketelvest. Above it is the new side stage, to which a truck lift makes it possible to deliver goods, and above it a rehearsal room. The crowning glory of the work is a second small hall, which promises performances with a magnificent view of the city.

The courtyard lives up to the client's ambitions to create an accessible house and to provide a place of remembrance. You will be able to walk past it and experience life behind the scenes. From the terrace of the restaurant and the staff canteen you will be able to watch the logistics. The architecture of the new façade on the Ketelvest and the façades of the courtyard are conceived as a 'frame' - referring to a sculpture by Philastre and Cambon of the Parisian decor studio - which is classical and timeless by its conception, but also exudes elan and grandeur through the use of solid natural stone, a material with a low environmental impact. The vision for the master plan also offers good proposals in terms of theatre technique and acoustics, with an enlargement of the orchestra pit and a raising of the stage tower. For the restoration of the historical interiors, the old colours of Philastre and Cambon will be used again. In the opera hall, the intention is to combine this with the preservation of the balcony of the architect Van Rysselberghe, which was added later on. DRDH combines the care of this very valuable historical house with a number of advantages for a varied future use.

All-inclusive study assignment to draw up a master-plan for the Music and Performing Arts Centre and to execute the expansion, renovation and restoration of the opera complex in Ghent