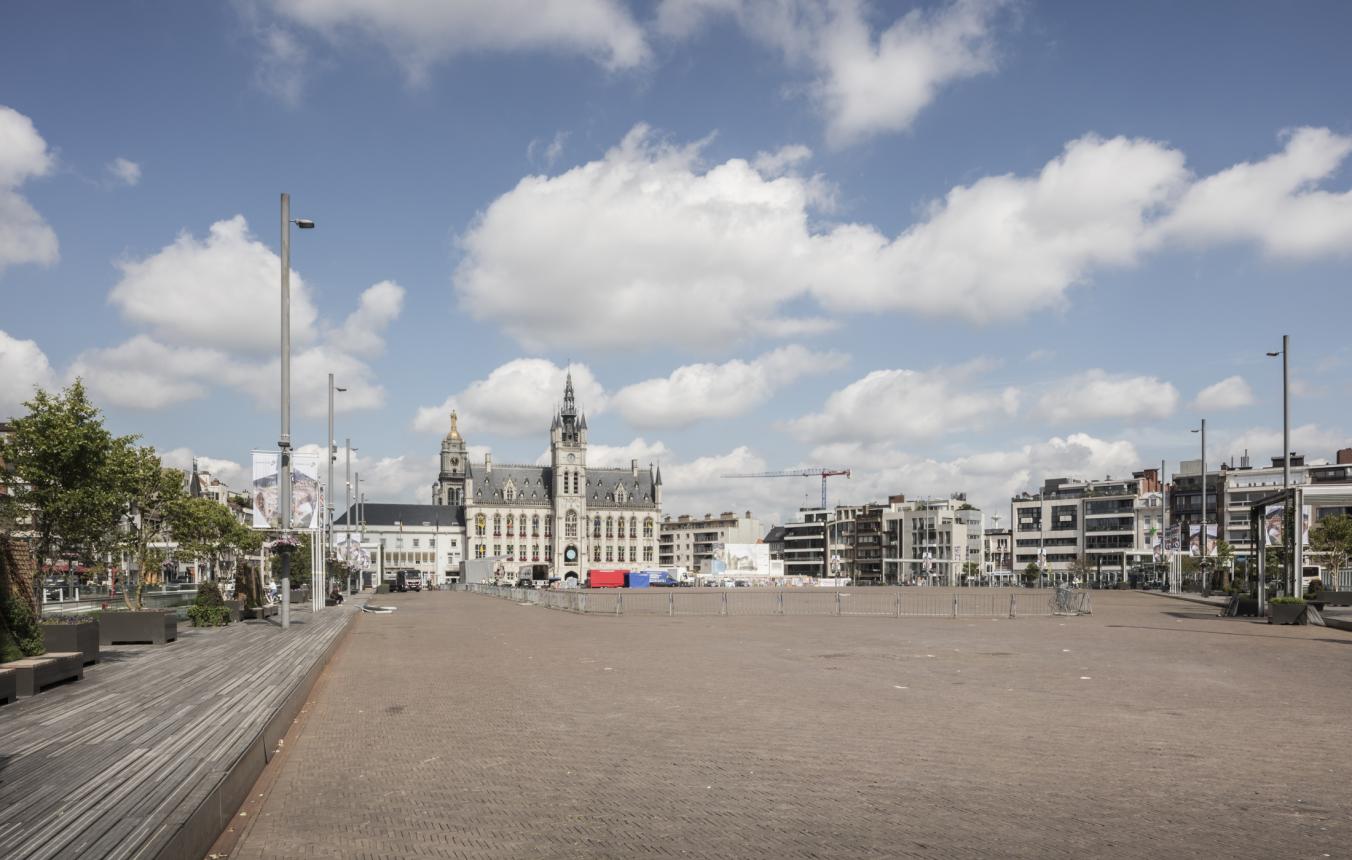 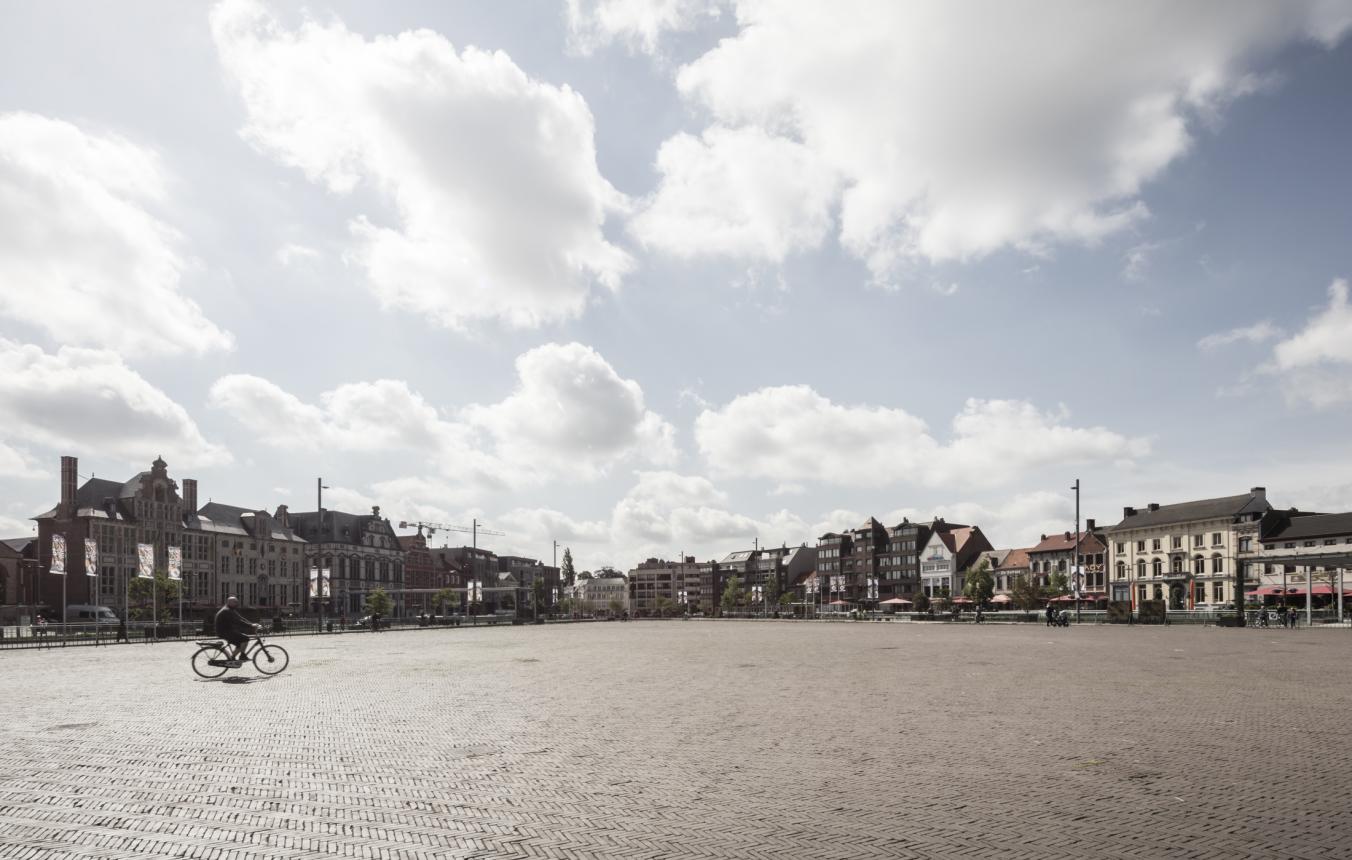 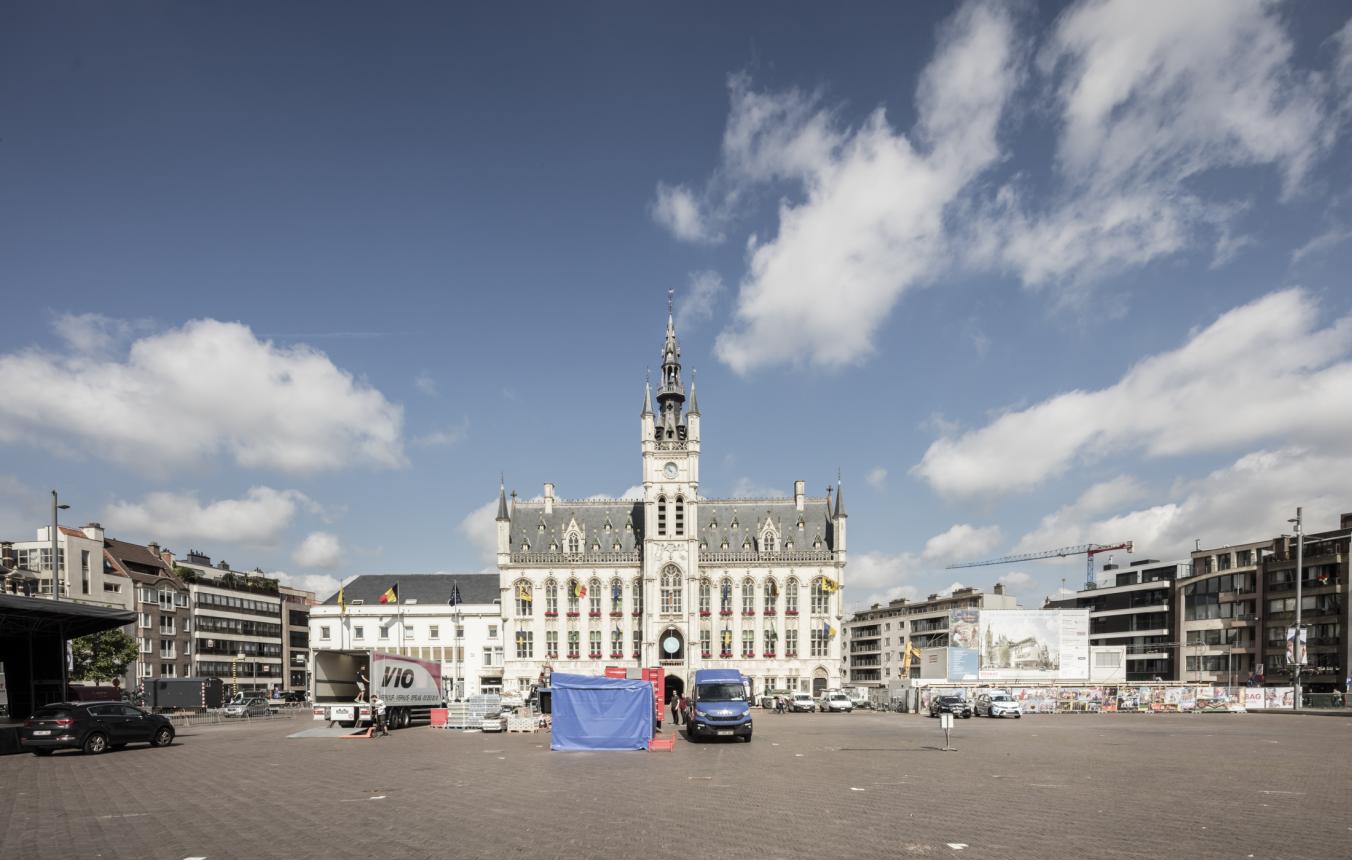 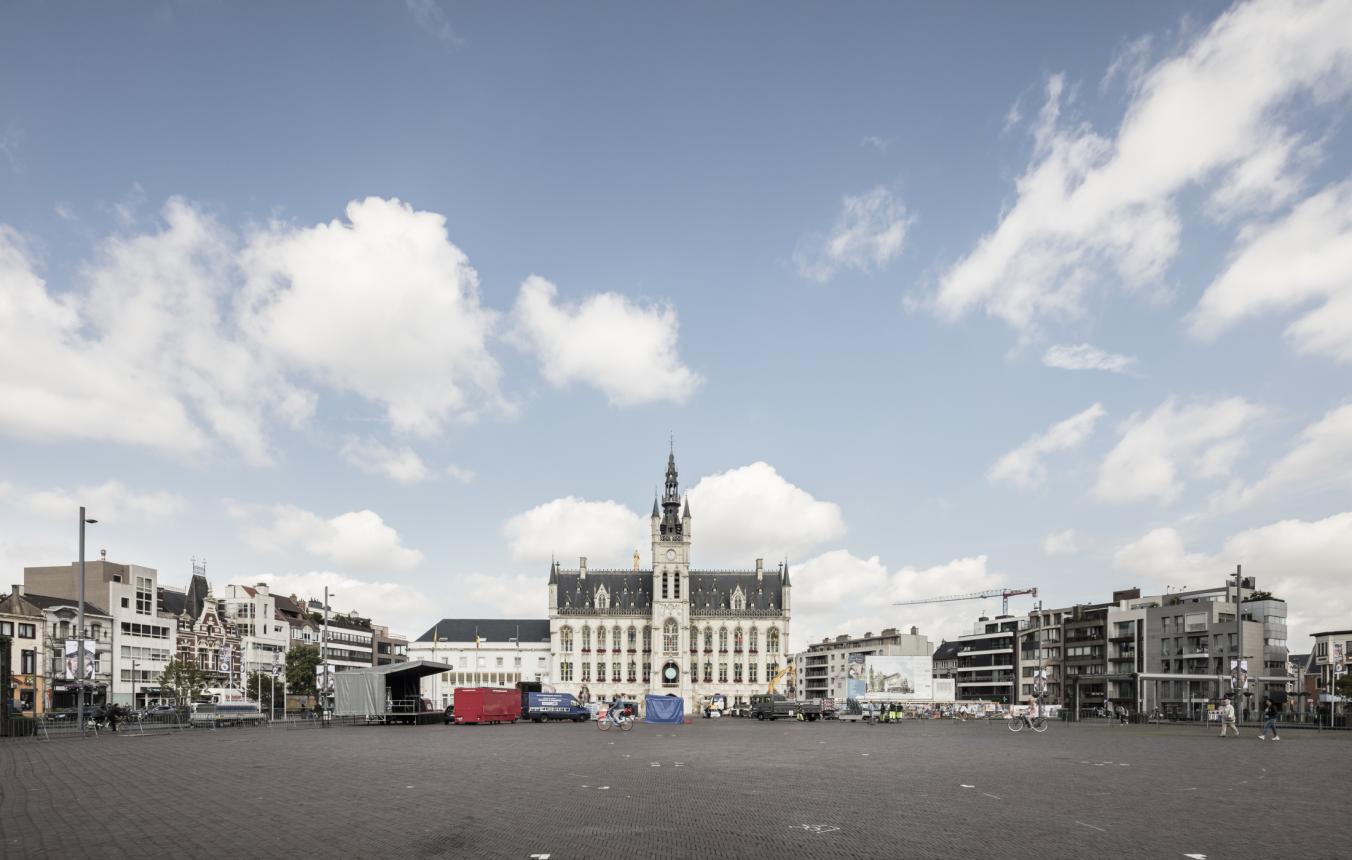 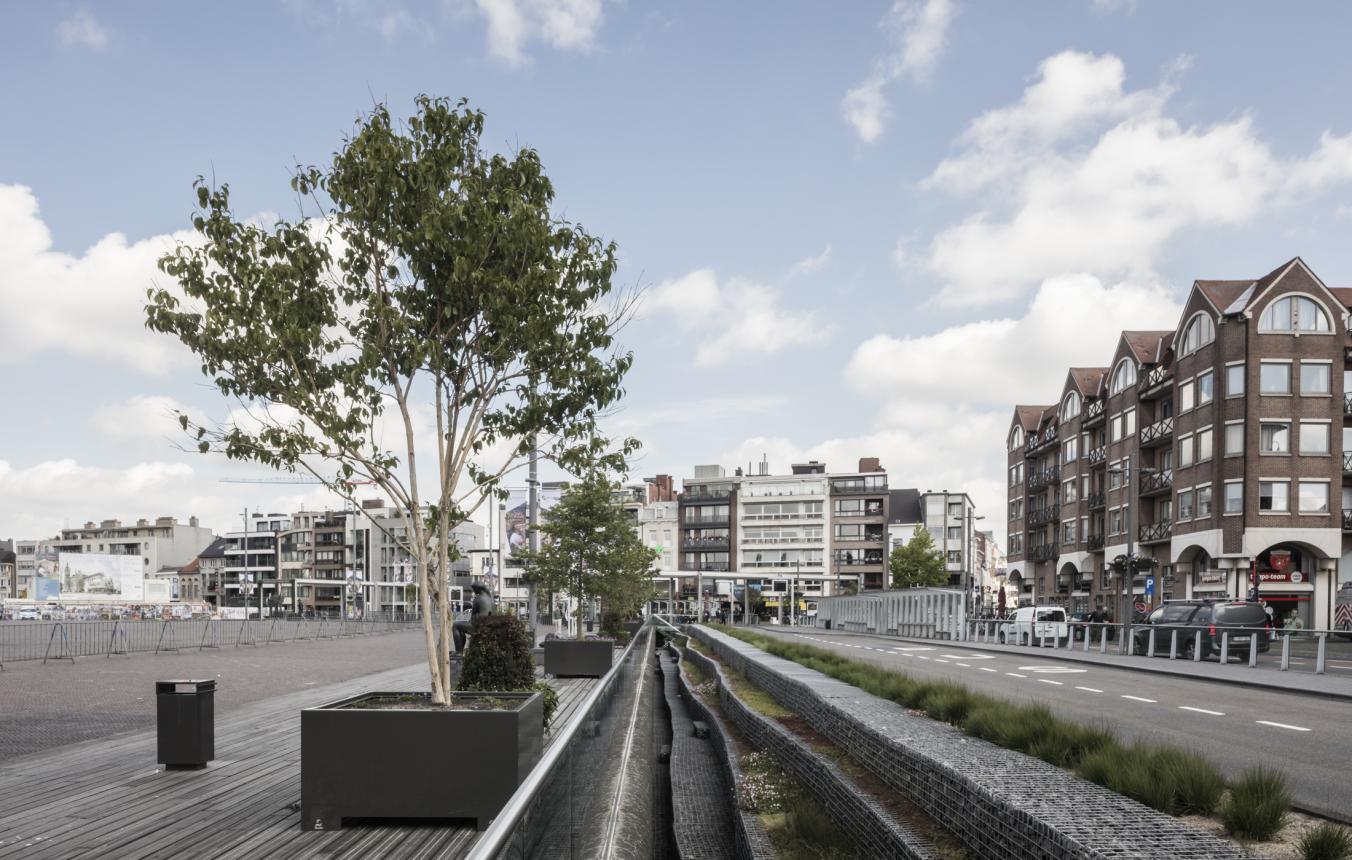 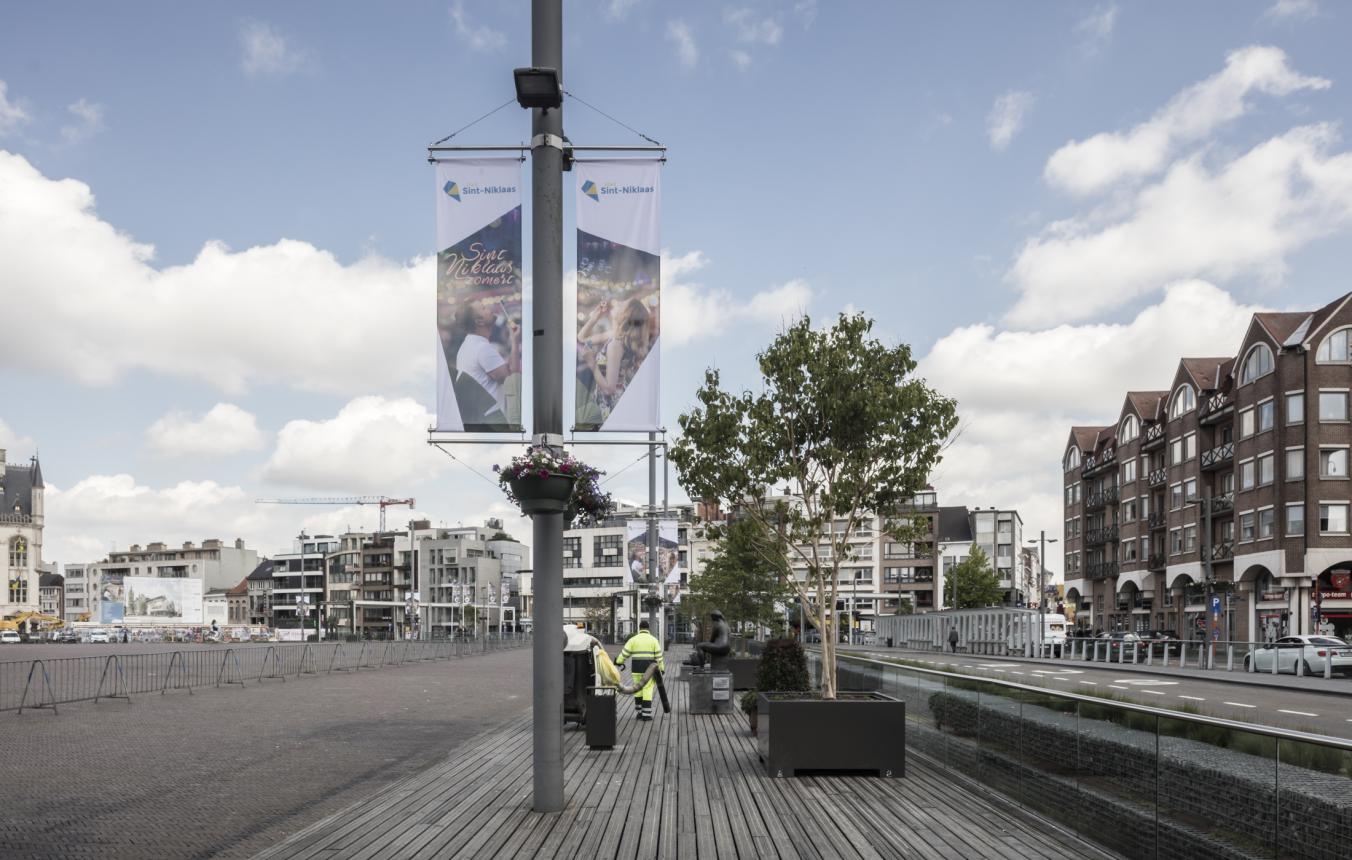 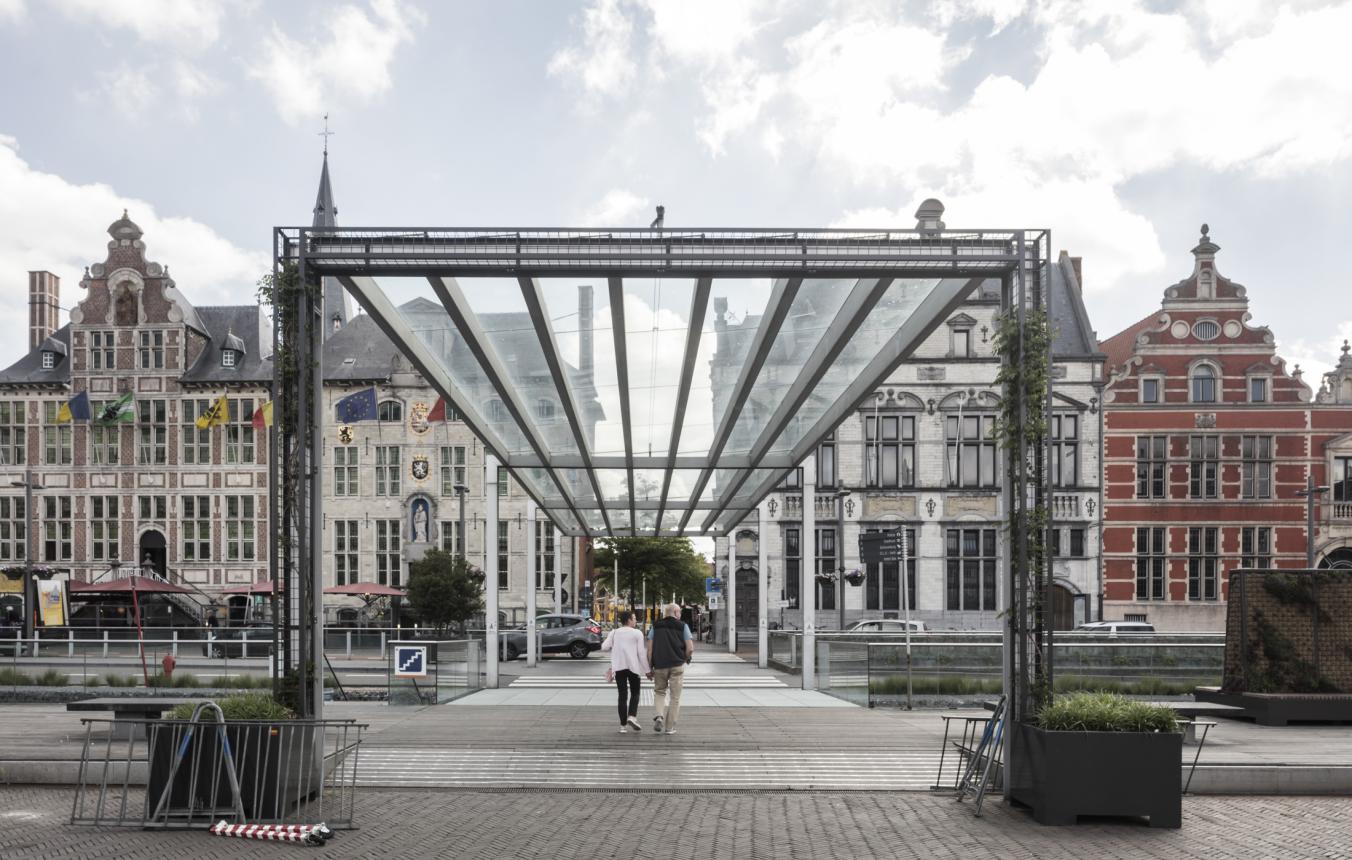 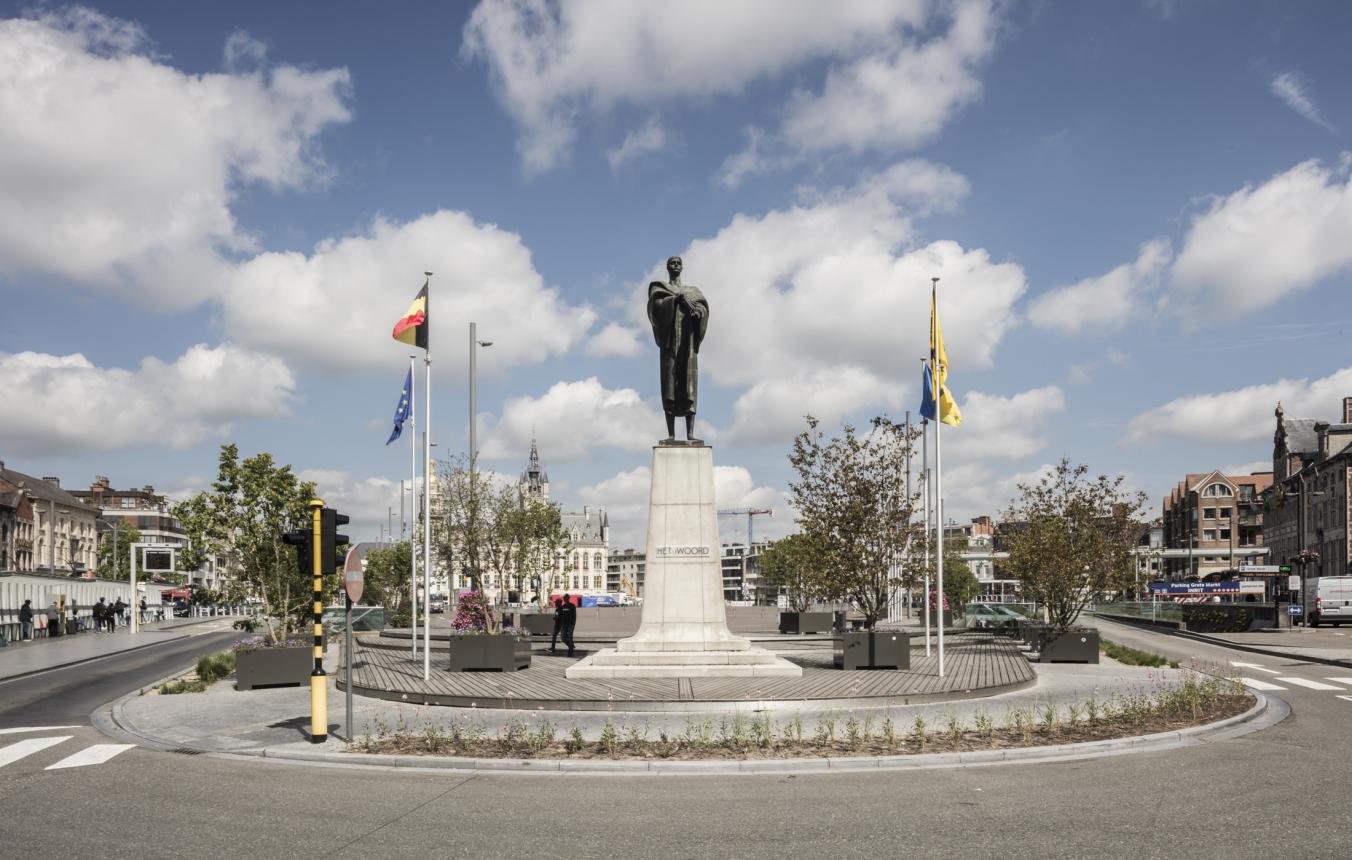 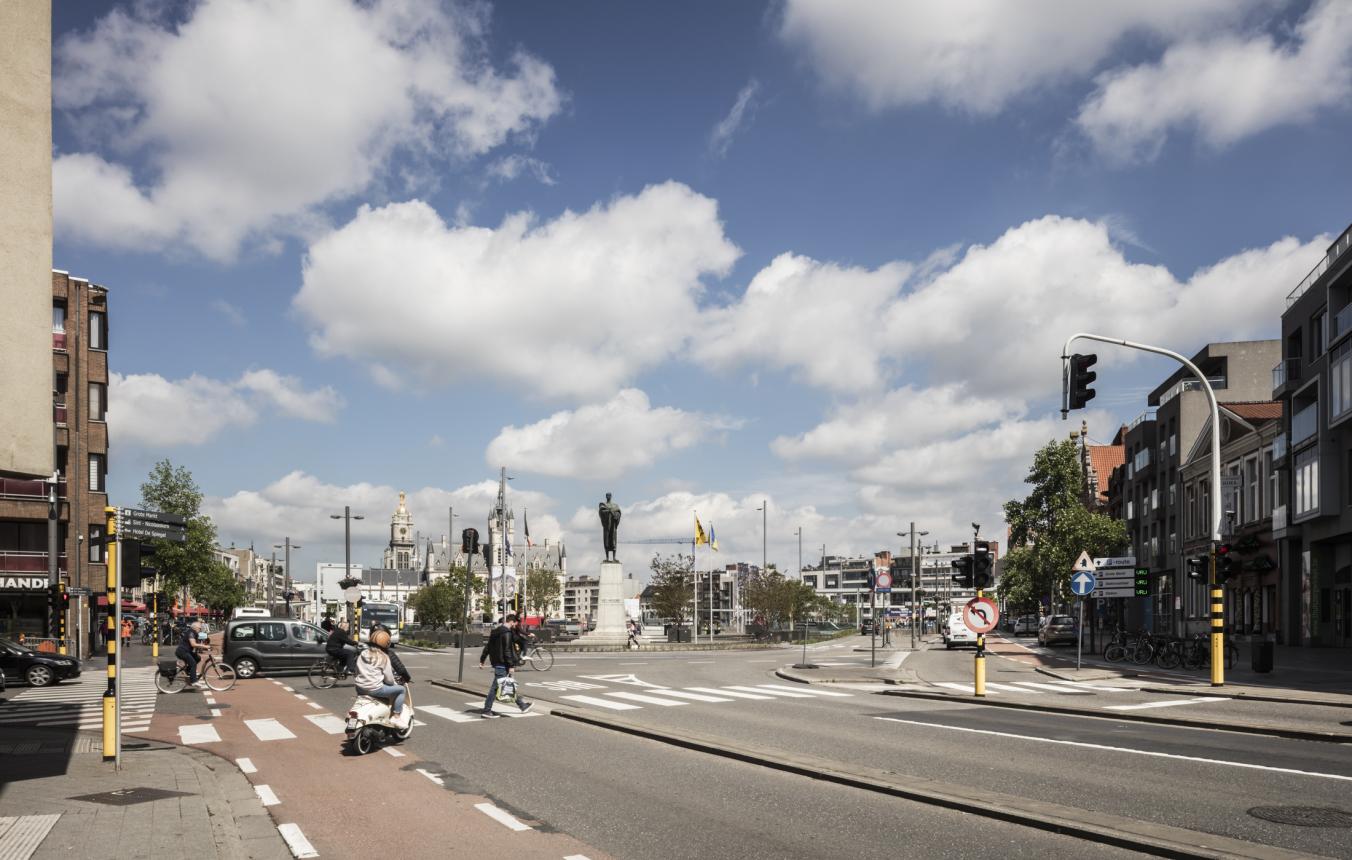 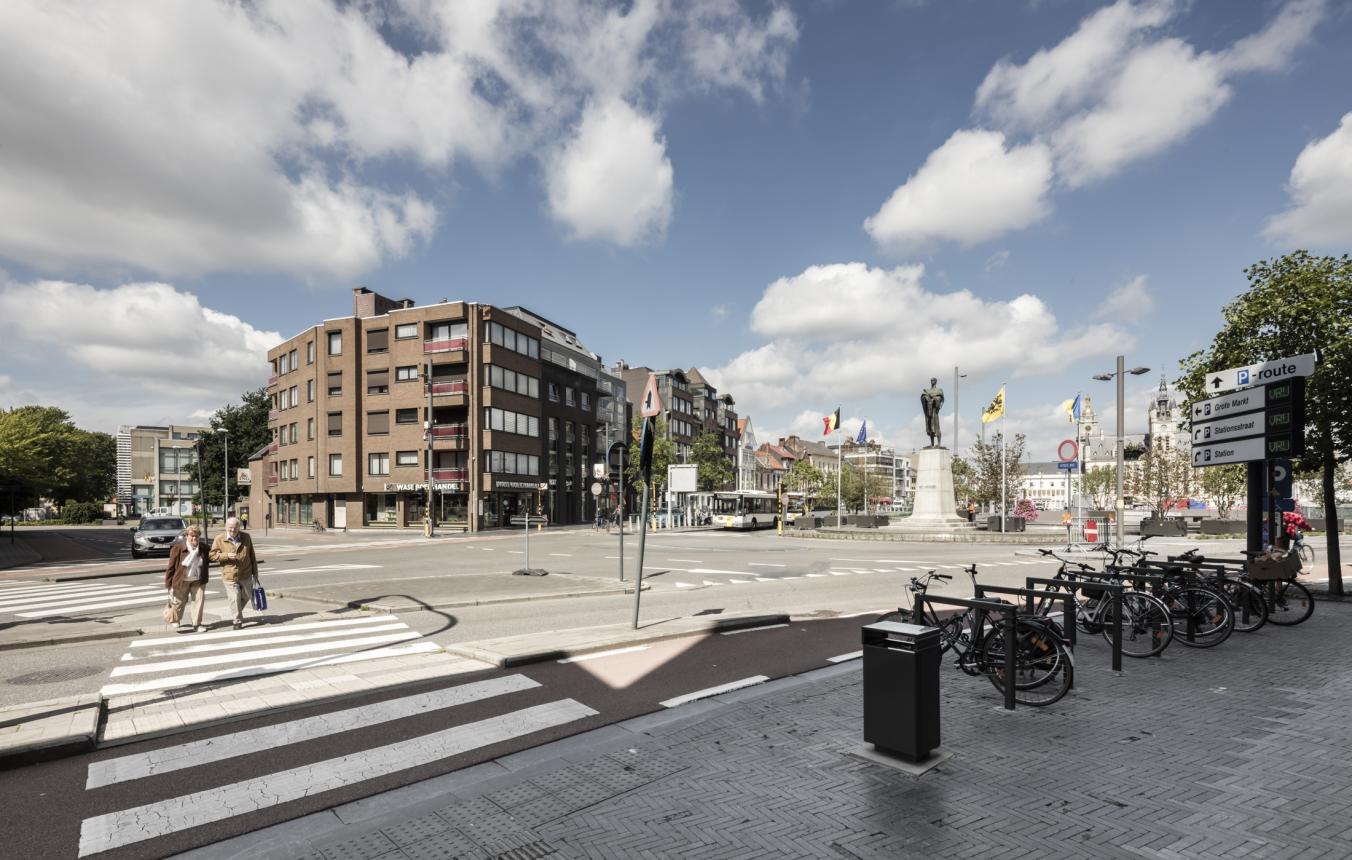 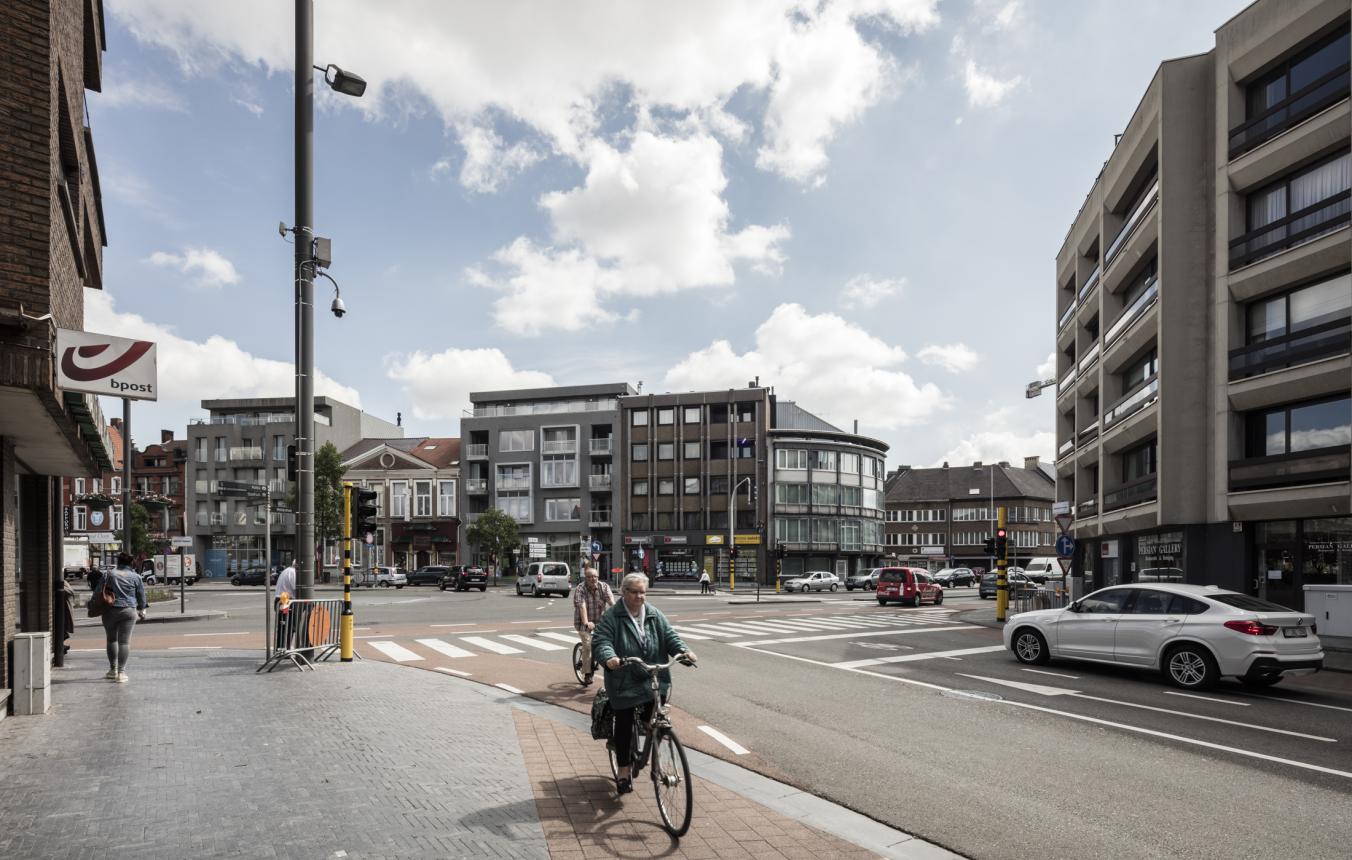 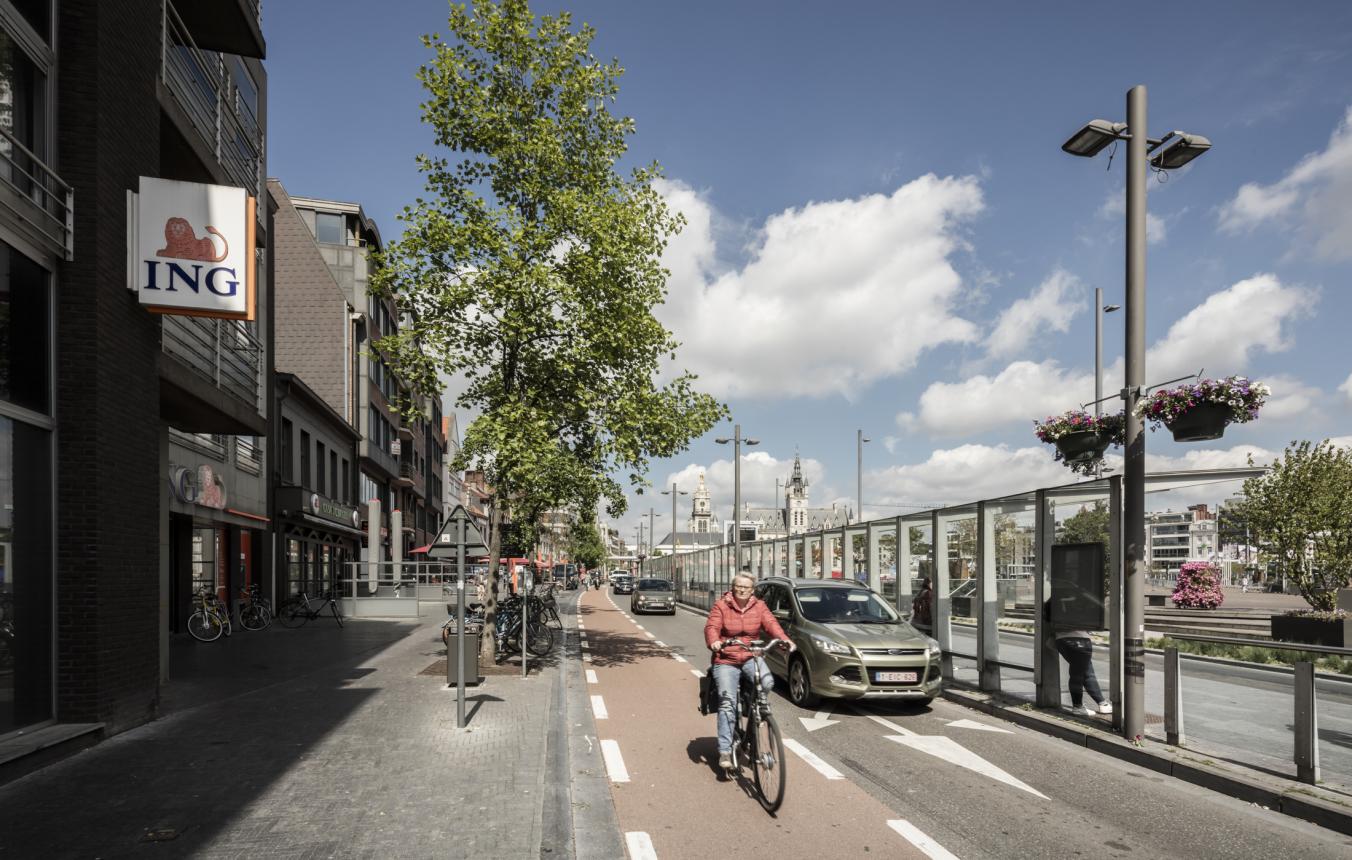 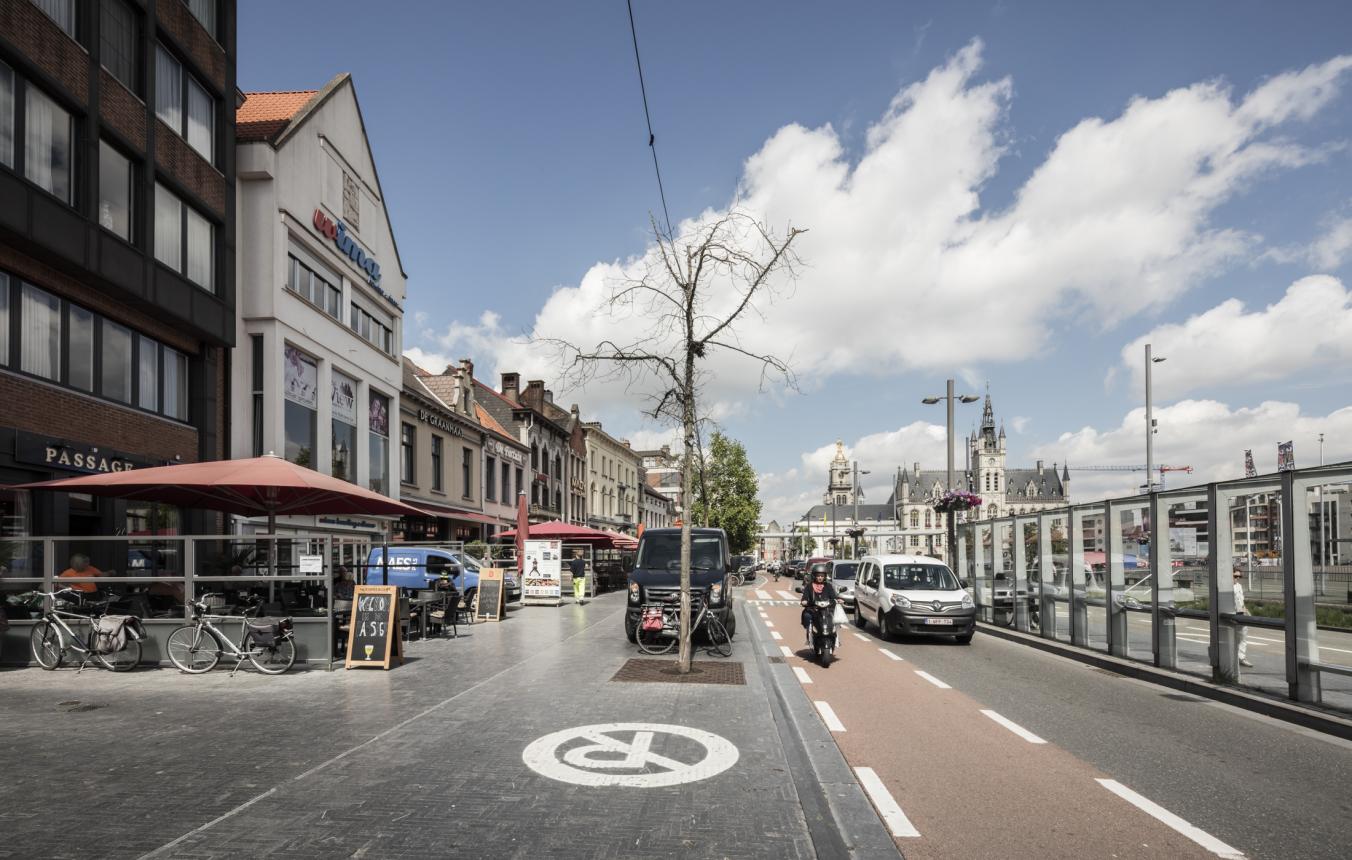 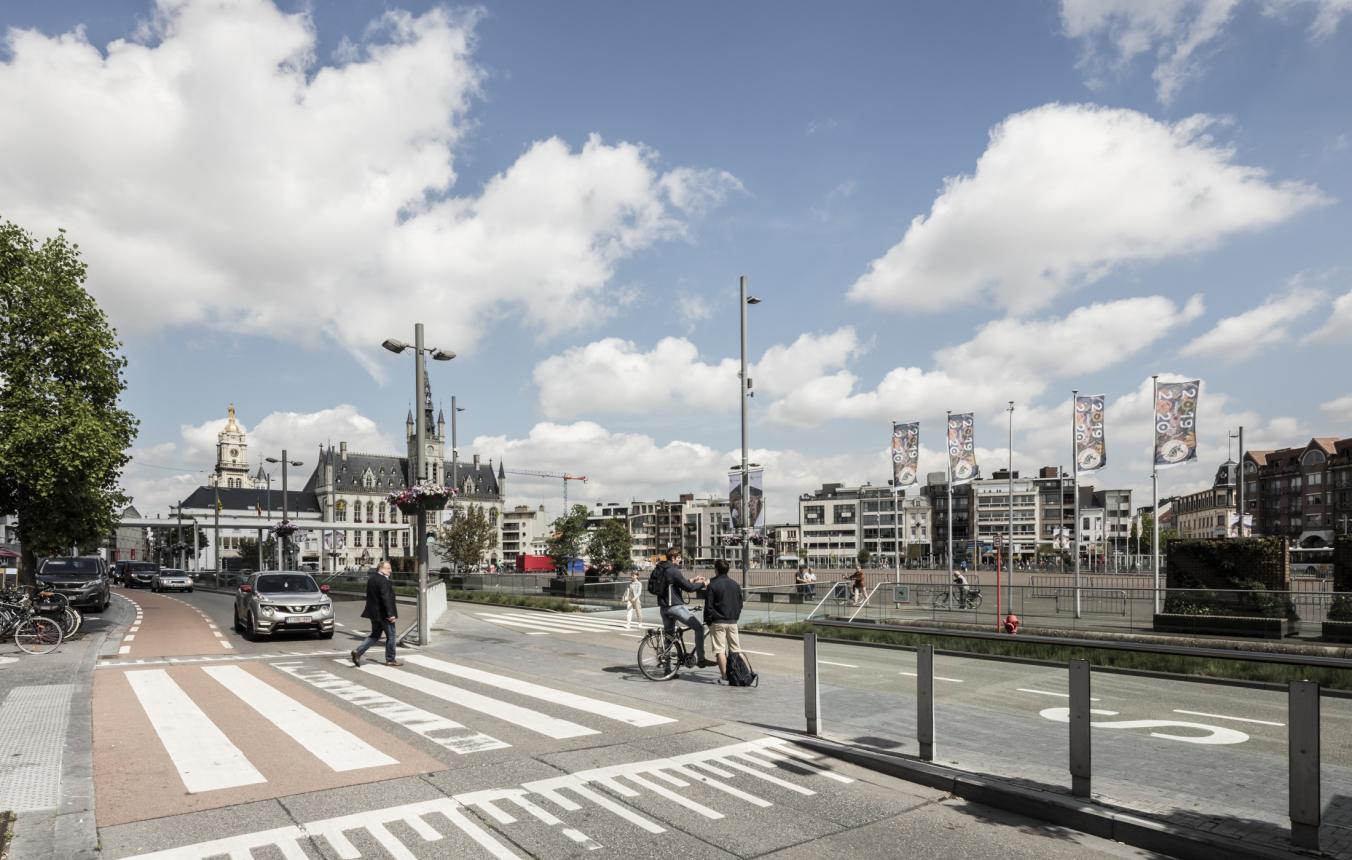 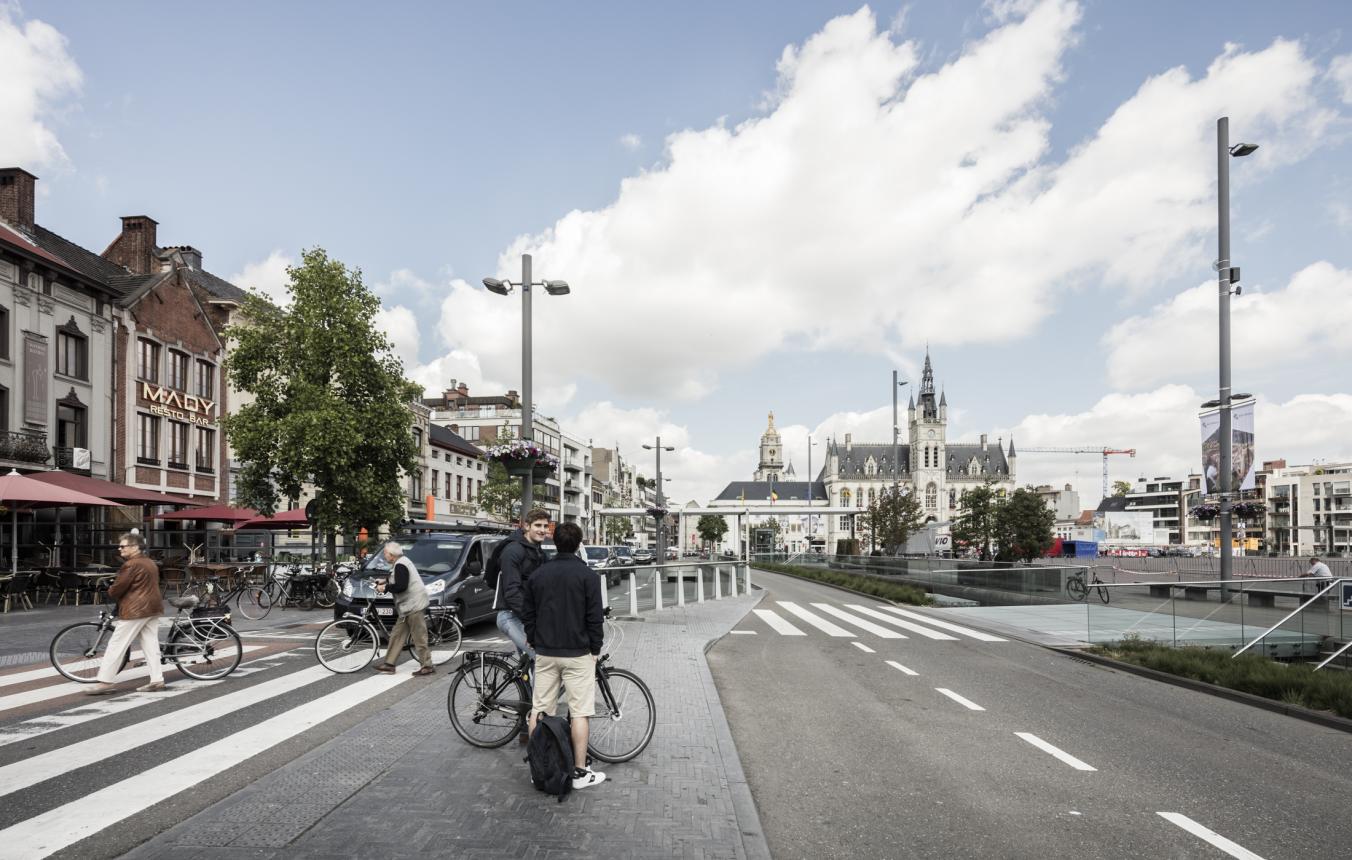 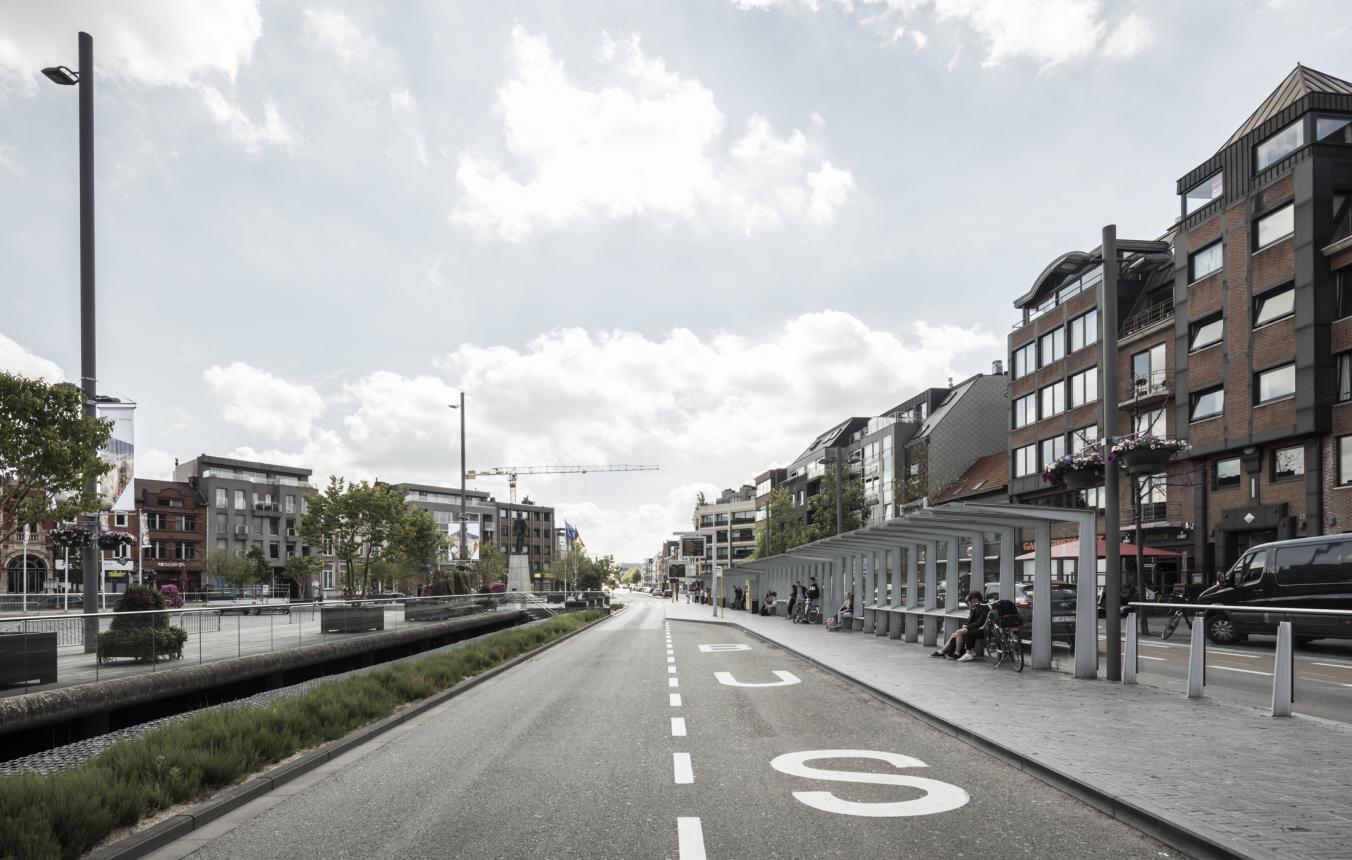 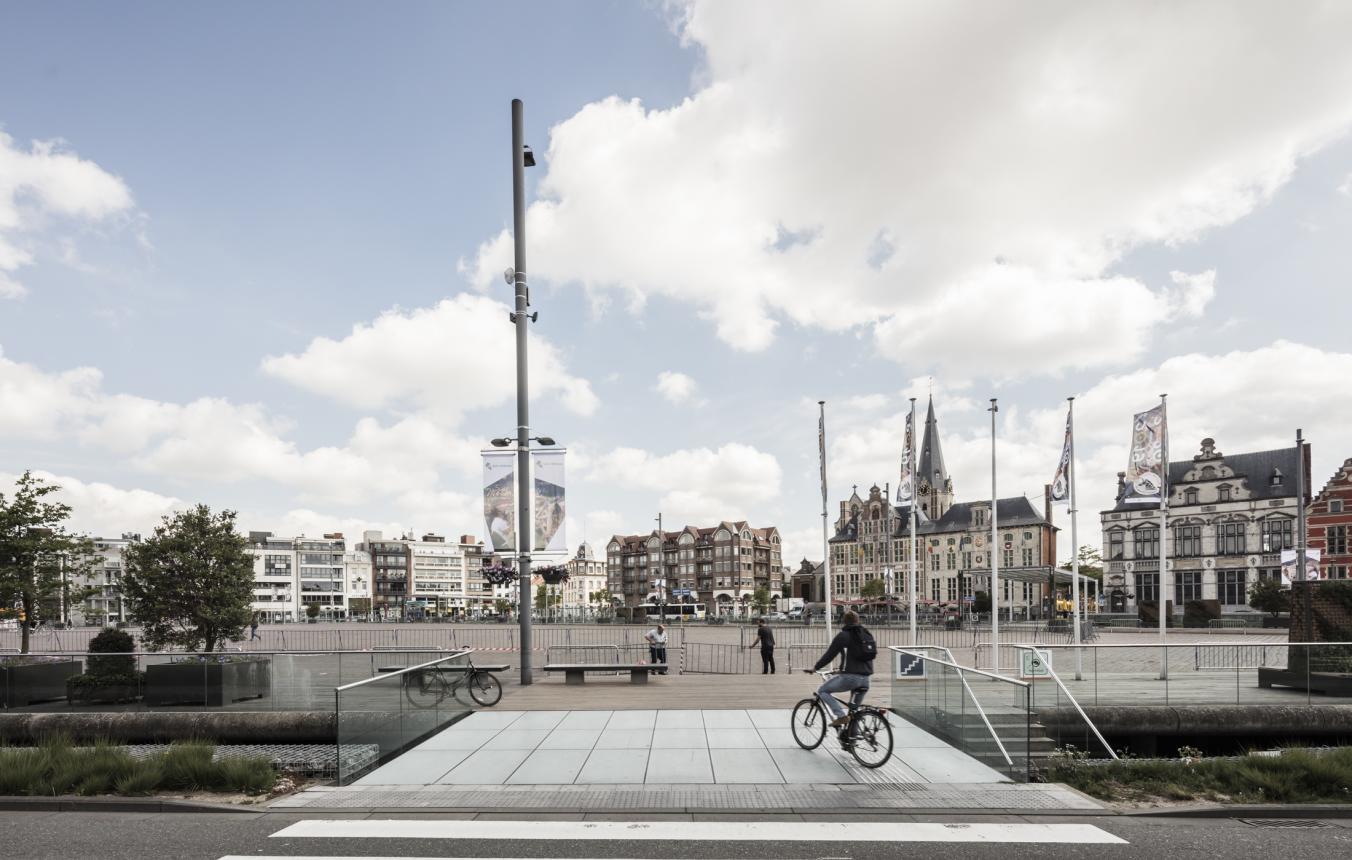 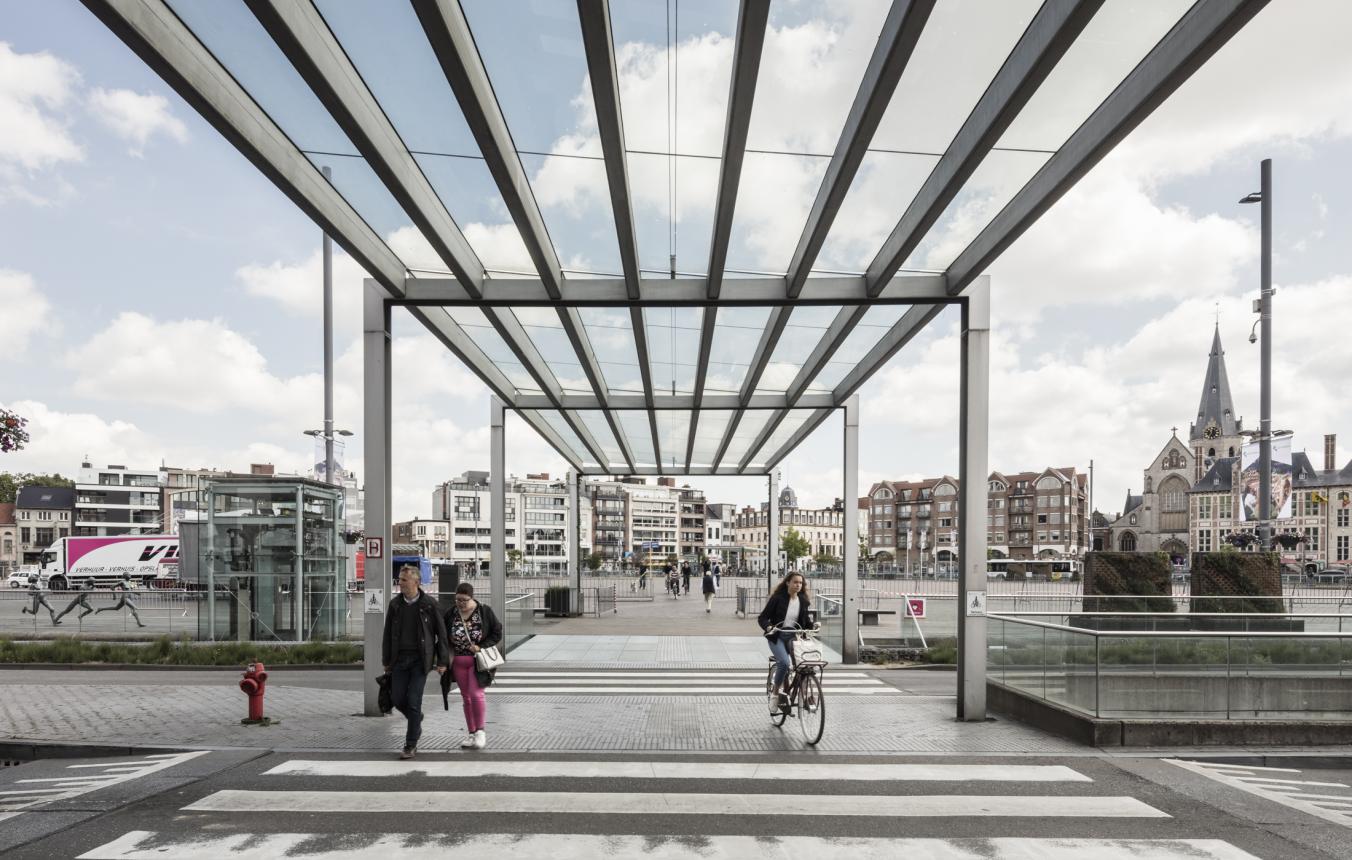 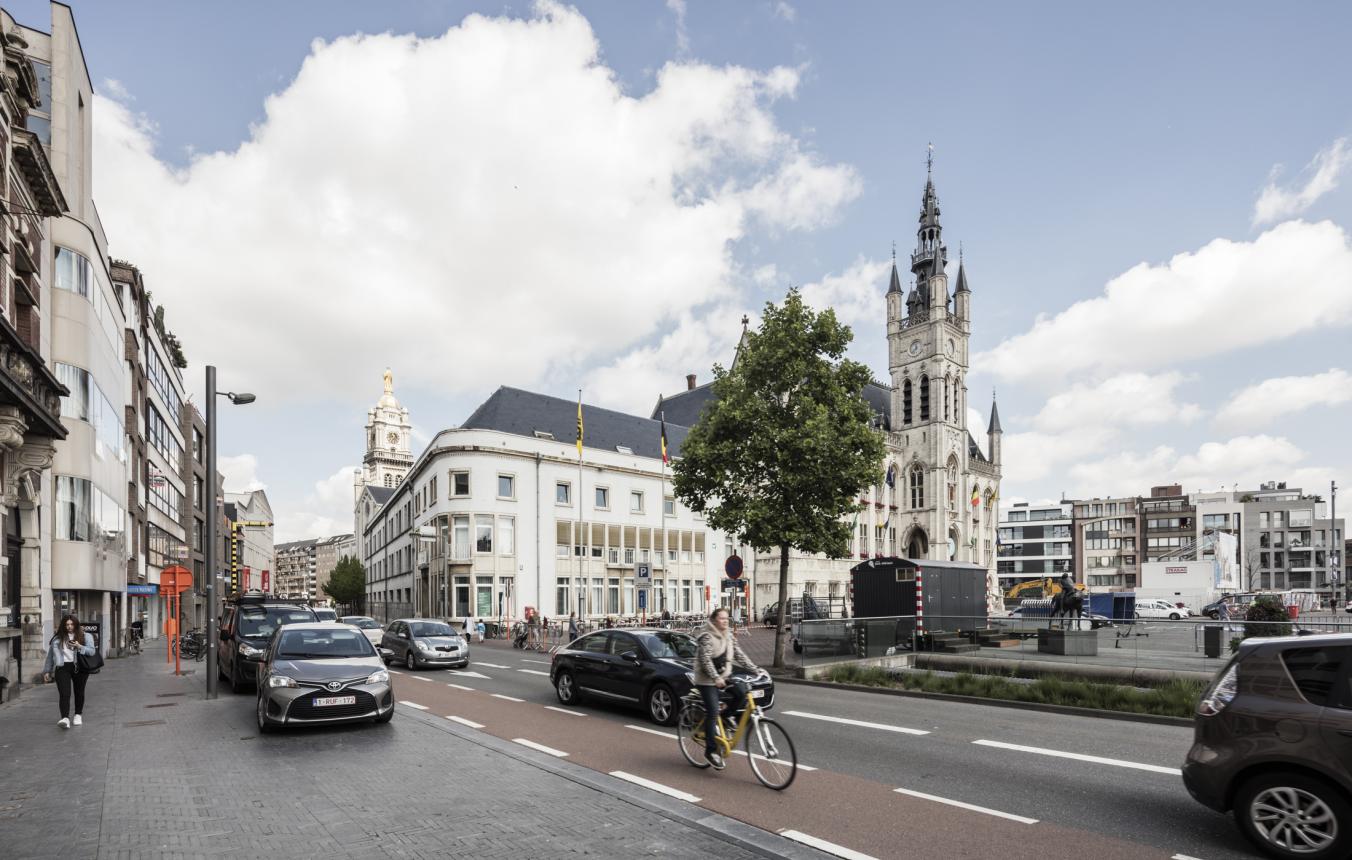 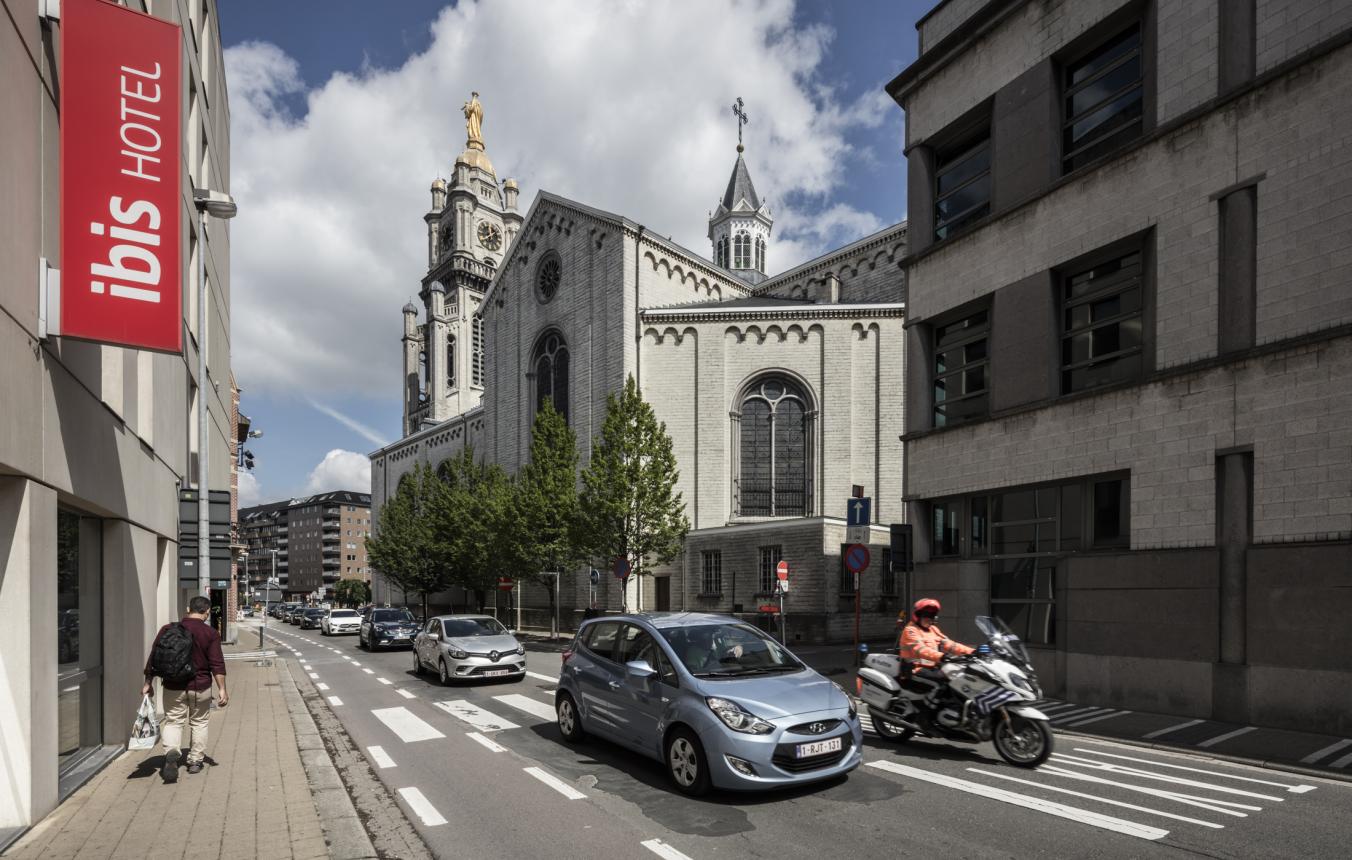 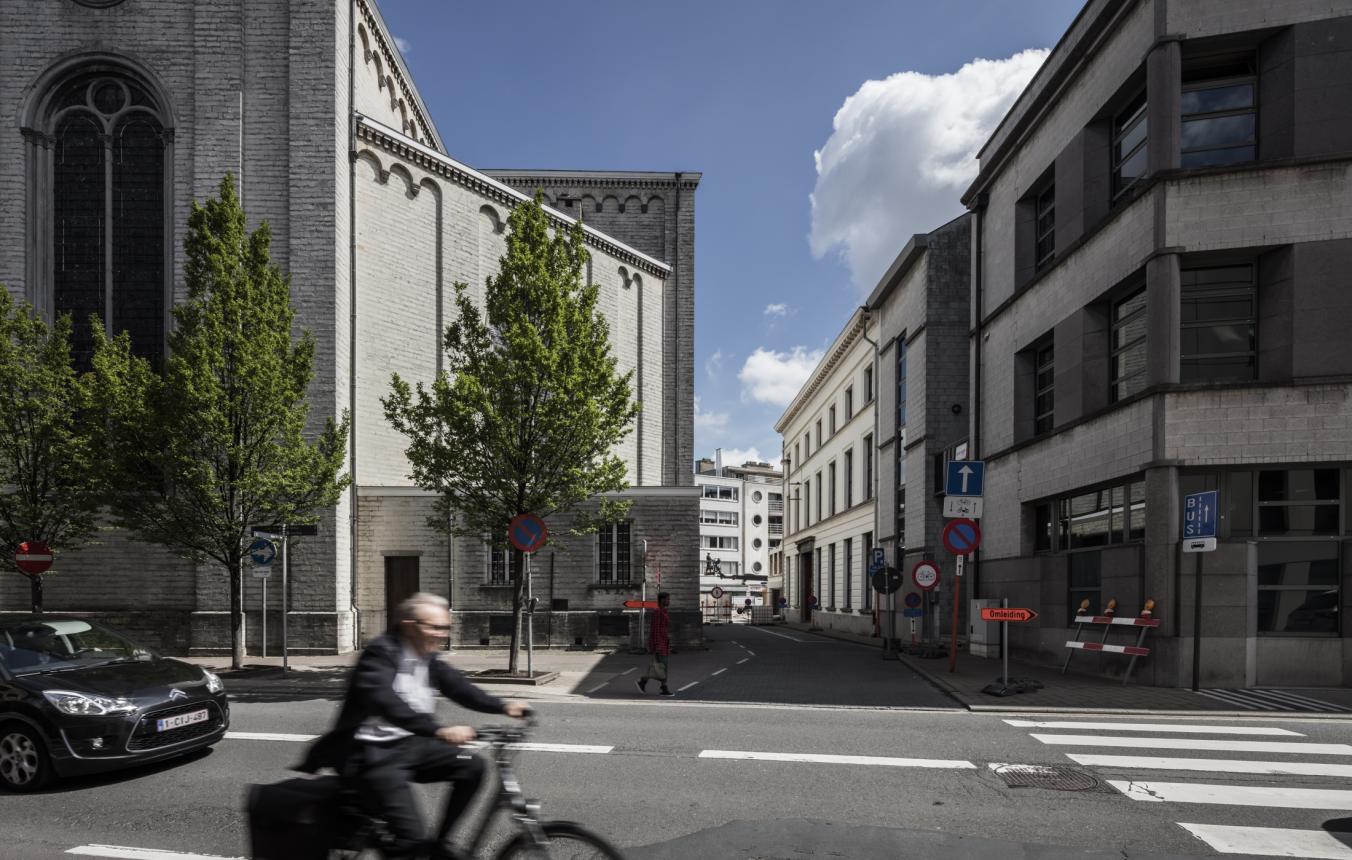 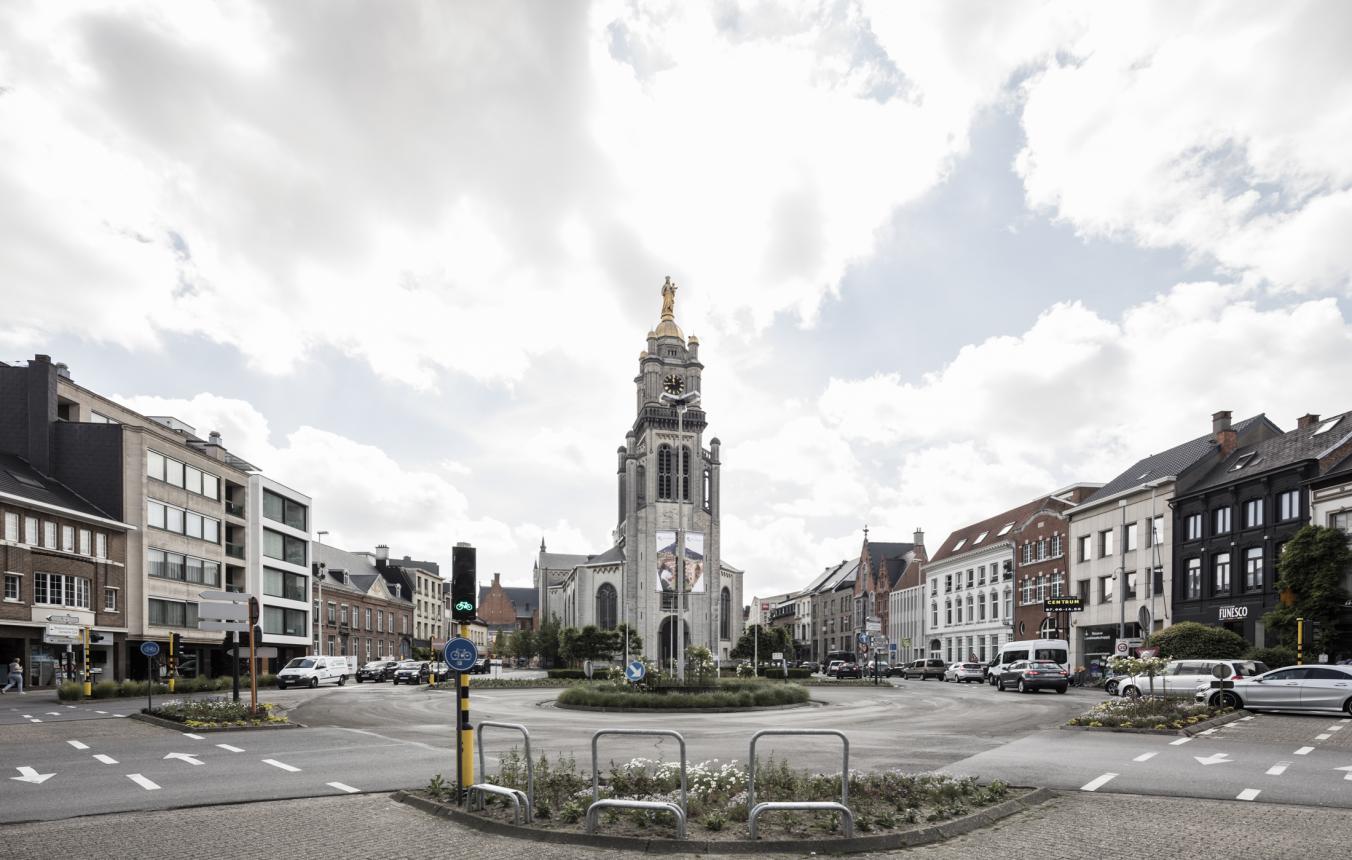 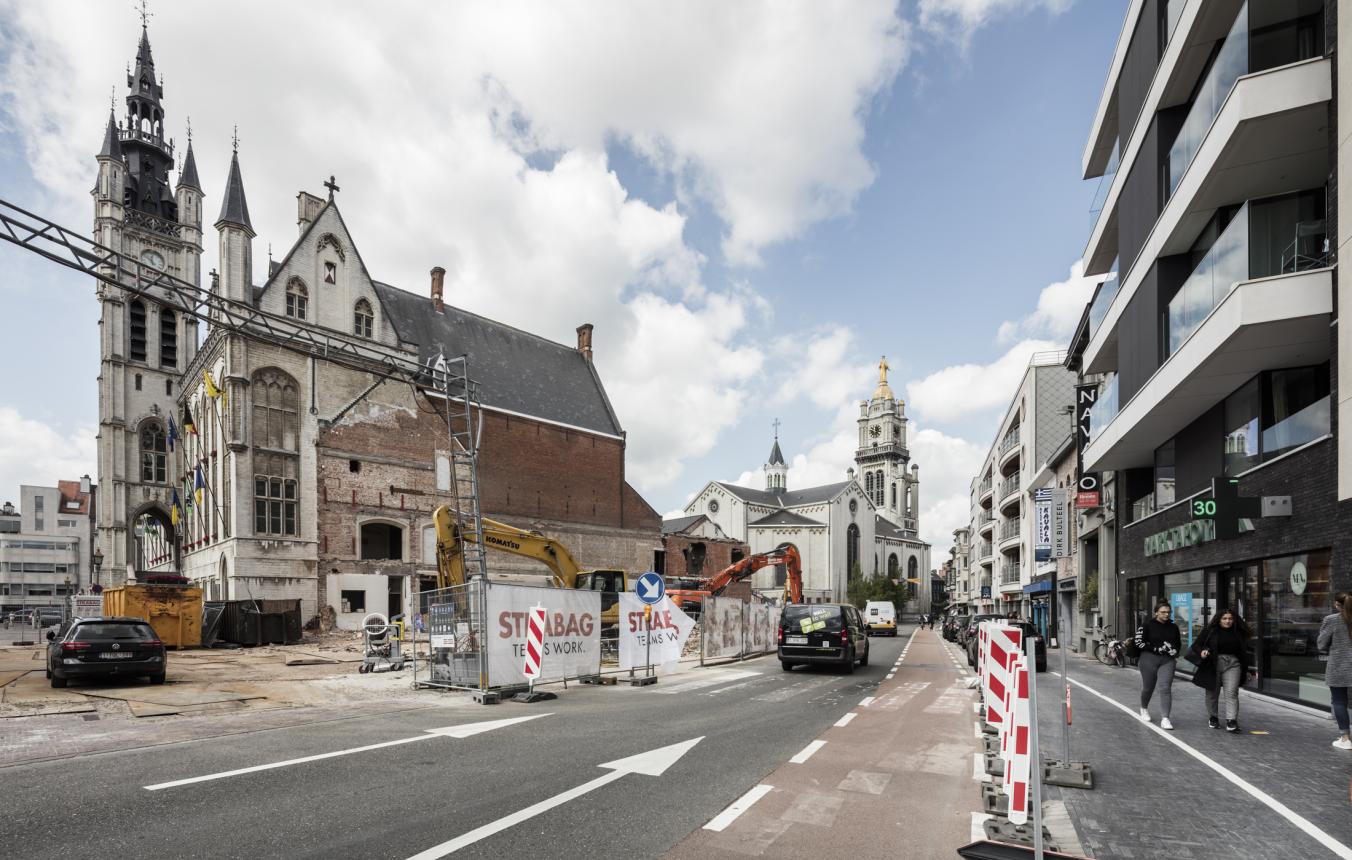 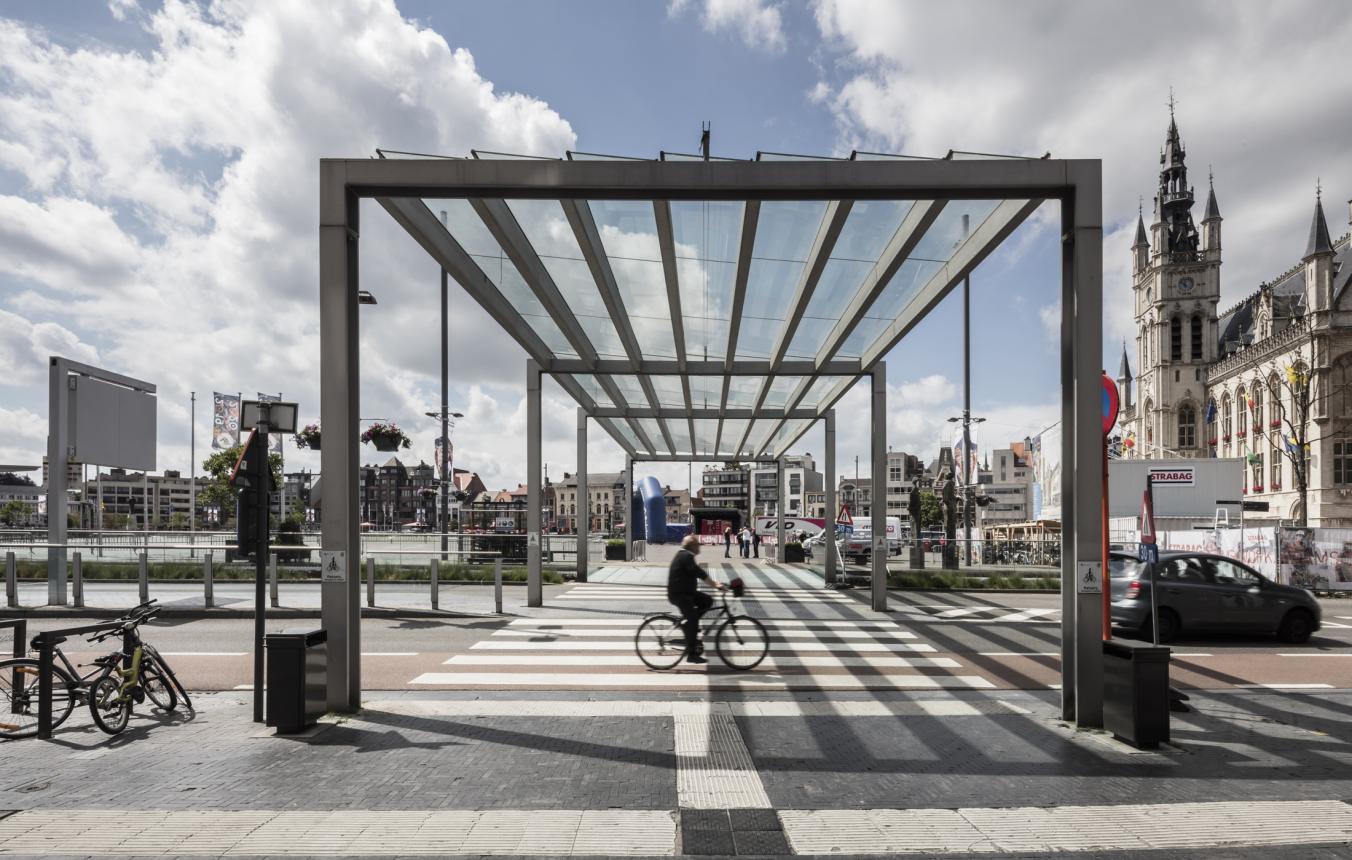 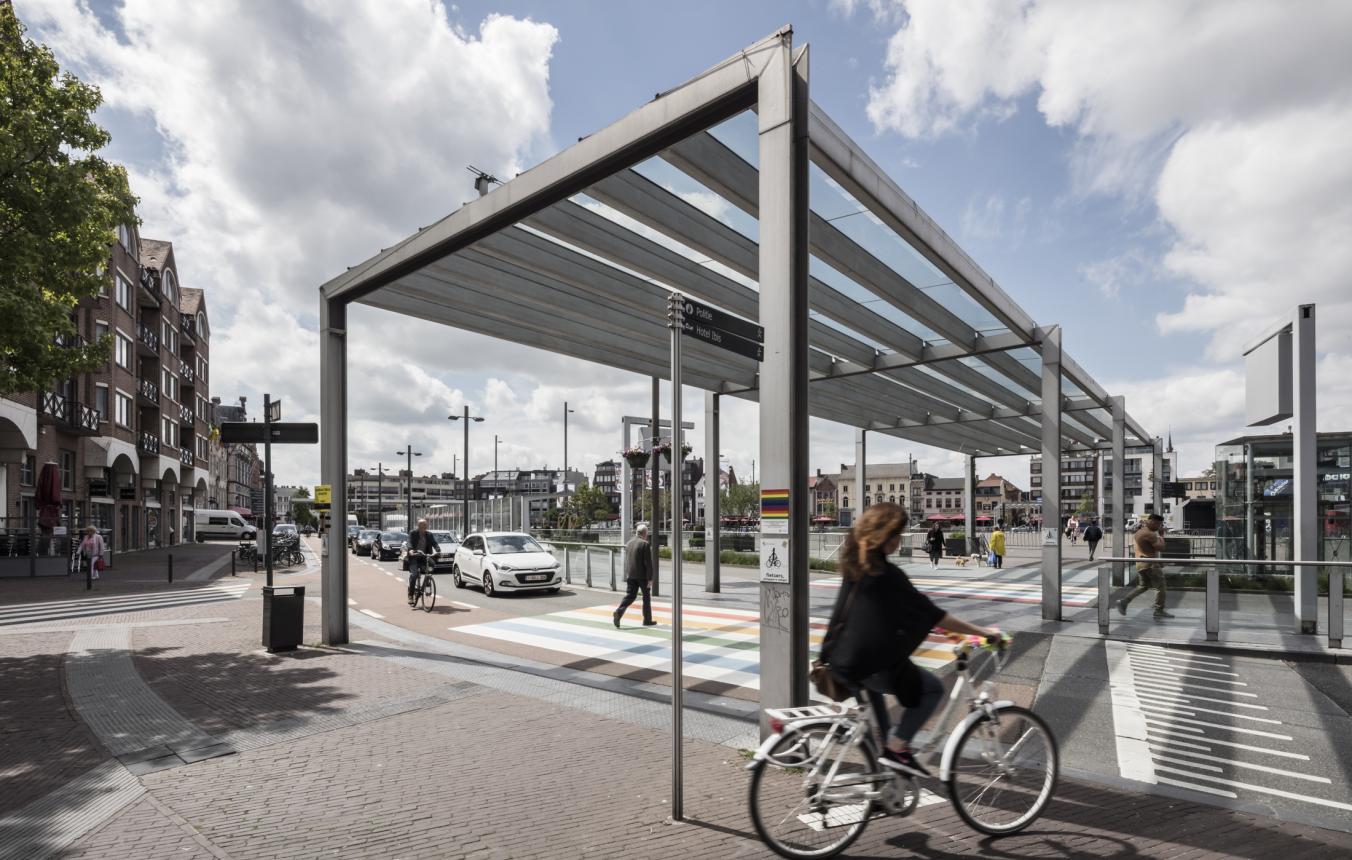 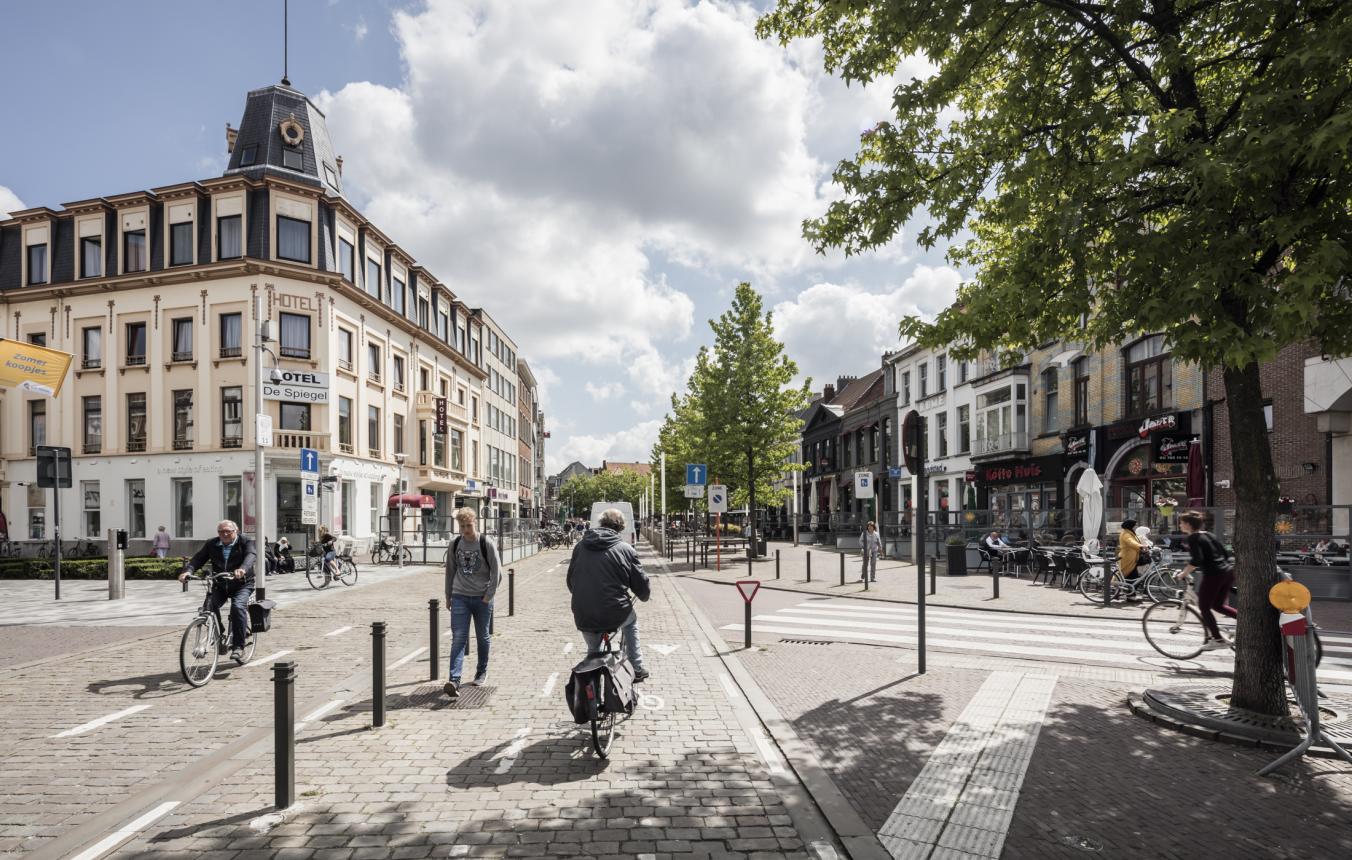 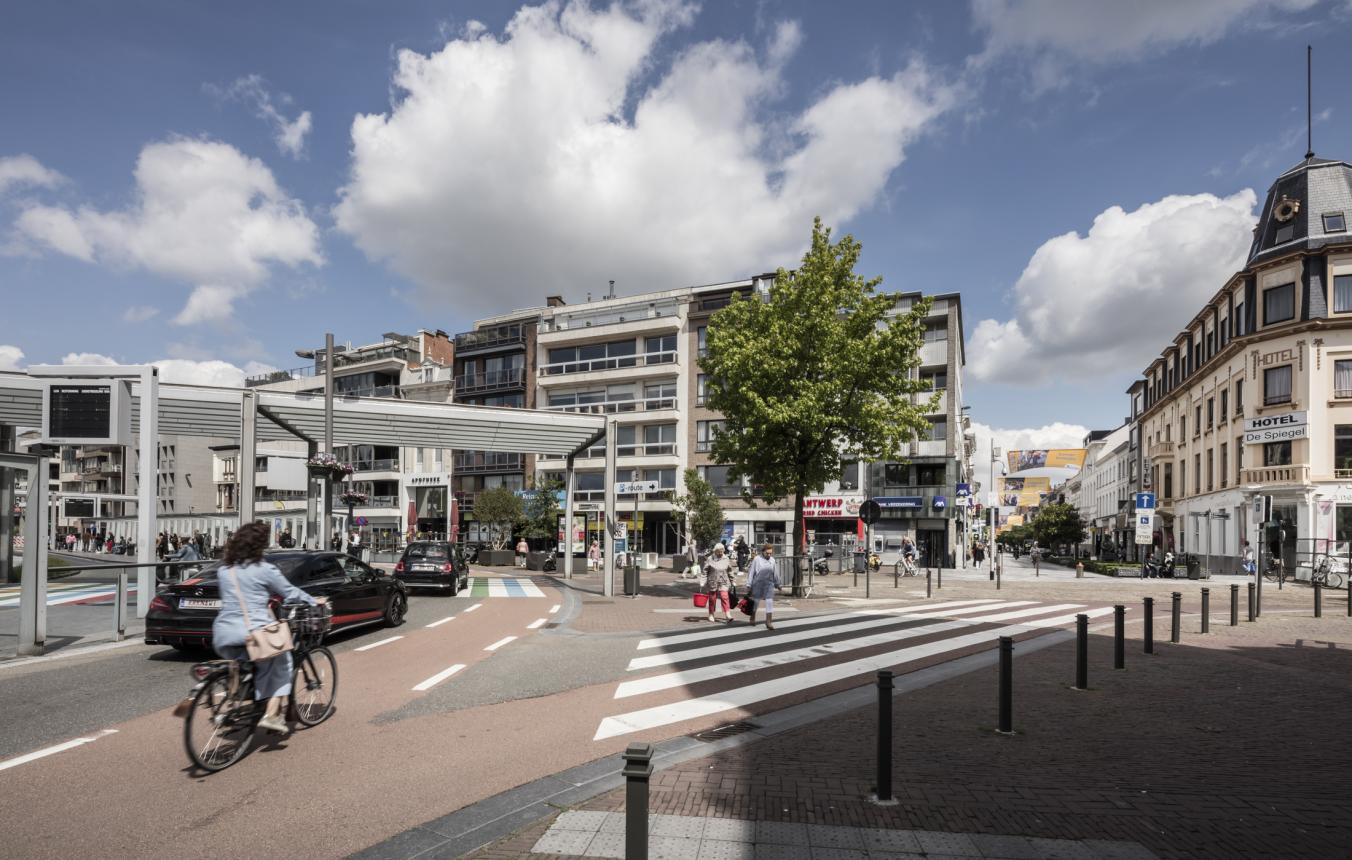 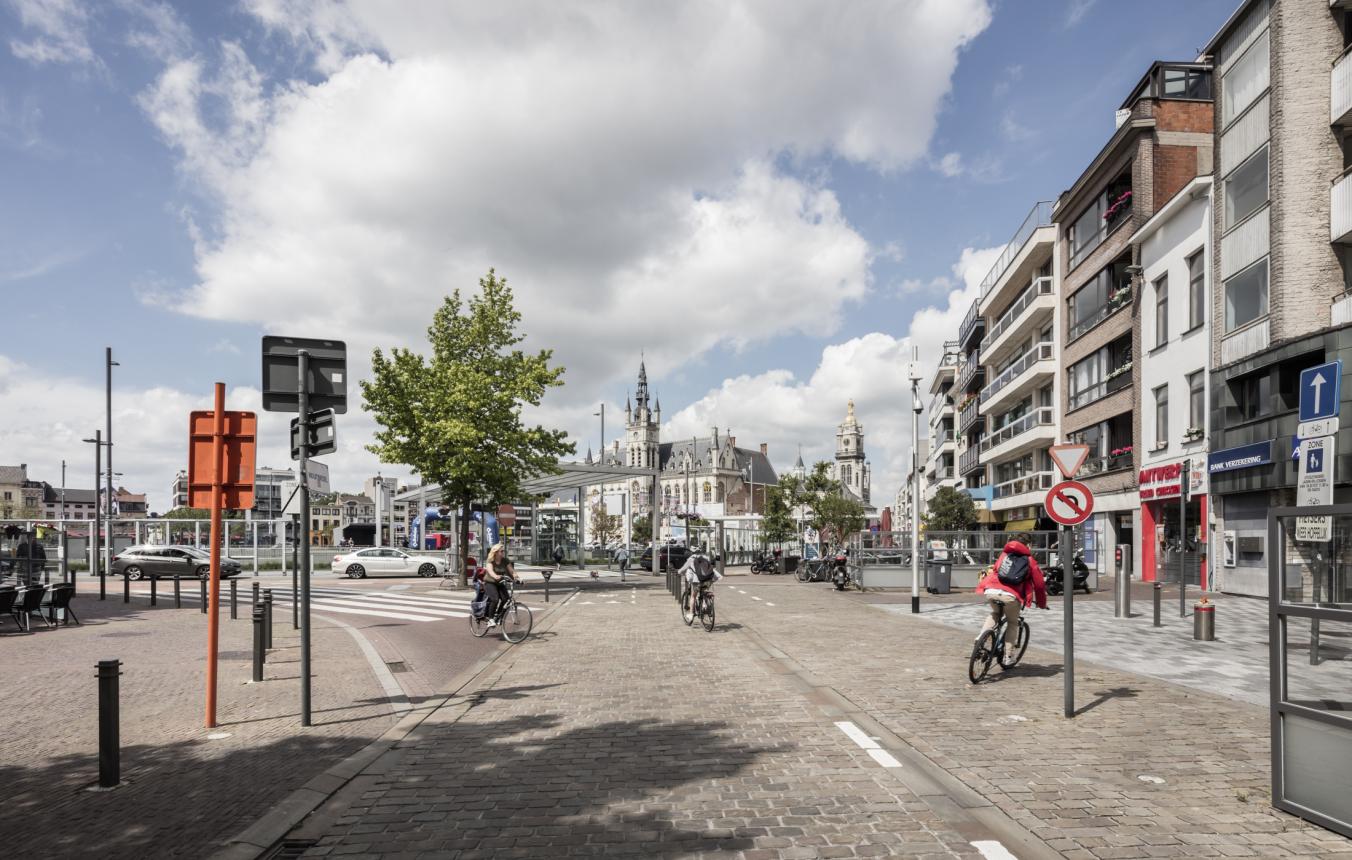 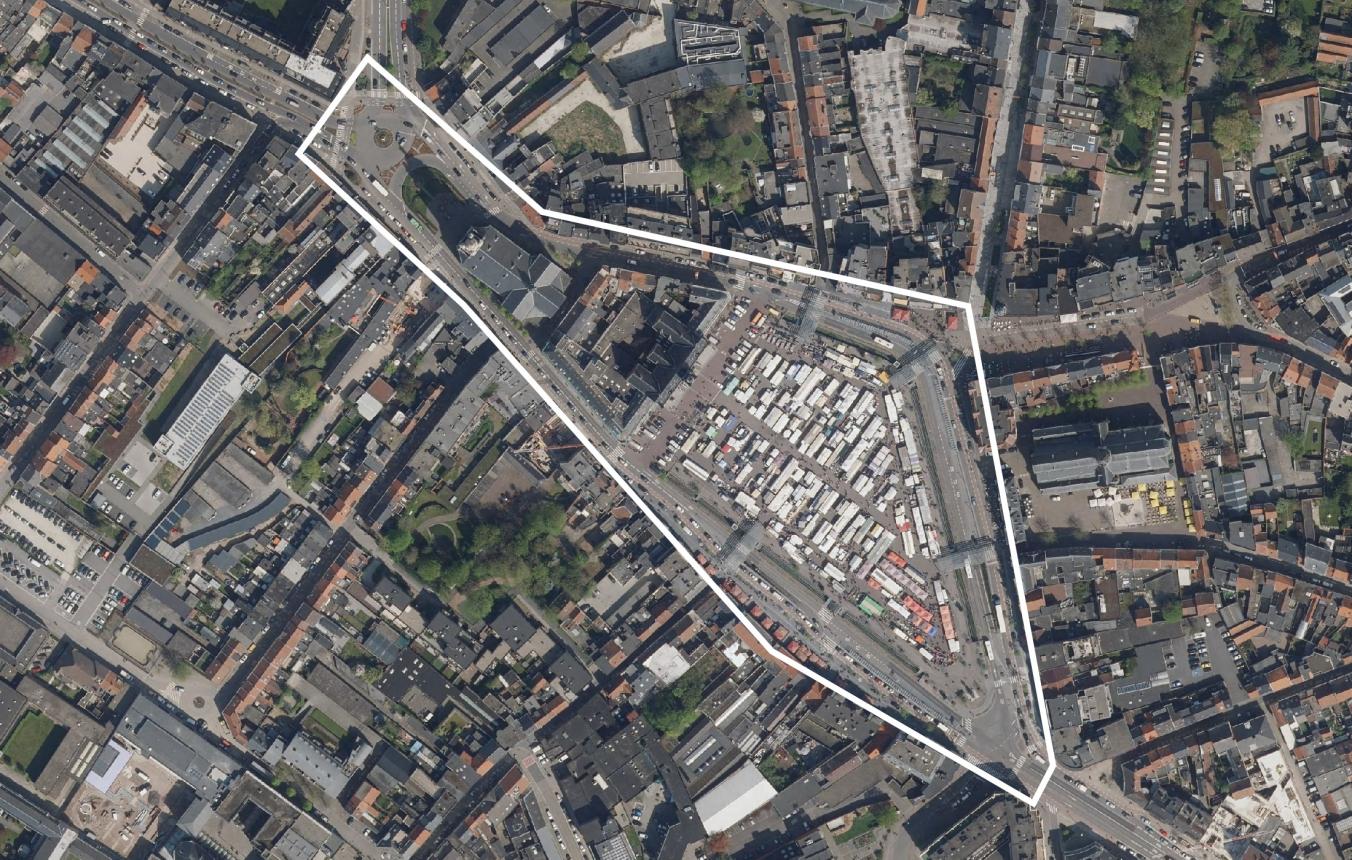 The Grote Markt has always been the central (market) square and showpiece of Sint-Niklaas. In 2005 the Grote Markt was completely renovated, with the construction of an underground open parking street and the design of the square as a meeting, events and experience space in the heart of the city. For instance, the Grote Markt is a unique take-off point for hot-air balloons during the annual Peace Festival. There is also the weekly market day.

However, the experience value is far from optimal. The different traffic modes (pedestrian, bicycle, bus and car) each have their own space along the edges of the Grote Markt. This means that the traffic infrastructure is dominant, resulting in a large paved area with little experience value.

In 2014 the public-space master plan elaborated a vision on the public domain of the city centre (‘Market City’). The objective is to create a coherent and pleasant place in the urban fabric by providing a continuous floor. The Grote Markt is seen as the central heart (as the  ‘mother of the squares’) and extended to the Onze-Lieve-Vrouwplein and the surrounding edges (from façade to façade), so that the square is anchored in a broader context.

In the context of the district circulation plan, the city wishes to make the centre a low-traffic area through the (phased) introduction of a loop system. Areas can only be reached by motorized traffic via an area access loop. As a result, the (through) traffic will be diverted to the ring road. Maximum accessibility is provided for soft modes of transport. Together with a complete bicycle policy (including large-scale parking facilities in the city centre), the achievement of a modal shift is a primary objective.

The vision of the public-space master plan and the ambition of the area circulation plan have created a momentum to make the Grote Markt once again the central gathering and meeting place of the city centre for users of all ages, and offer opportunities to realize spatial quality in the public space. In other words, the city must become a city for people rather than a city for cars.

We are notably trying to achieve this objective by intervening in the heart of the city, in particular by redeveloping the courtyard of the Grote Markt and its surroundings. In concrete terms, the commission consists in:

The reduced traffic intensity also makes it possible to reduce the road-surfacing around Onze-Lieve-Vrouwplein and there too to improve the quality of the public space. The assignment therefore relates at least to the area demarcated by the edges of the Grote Markt, the Parkstraat, the Onze-Lieve-Vrouwstraat and the Onze-Lieve-Vrouwplein. Within this framework, and in view of the realization of the new town-hall shop, the space in front of the town hall also deserves to be upgraded.

With this assignment we want to focus on new challenges such as softening and greening, water management, interaction and leisure and air-quality improvement. In the context of a sewerage project, the underground will be renewed from the town hall to Onze-Lieve-Vrouwplein. At the same time, consideration must be given to circularity in the design. Is it possible to think about the wider programme of the car park in the future and is it possible to reuse material?

A broad participation process should be attached to the assignment. We are considering involving primary stakeholders such as providers of public transport, the emergency services and the car-park manager on the Grote Markt, and other important stakeholders such as the hotel and restaurant industry, schools, heritage services, the young, the cyclists’ union, city dwellers, shopkeepers, visitors (including tourists) and users of the market square (such as balloonists).

Through the Open Call procedure of the Flemish Government Architect, the city of Sint-Niklaas is looking for a talented design team for the redevelopment of this important public space. In order to properly integrate the design into the spatial fabric, the designer must also pronounce themselves on a wider study area and the relationship of the Grote Markt with its surroundings. A multidisciplinary design team is required for this assignment, with competences in the areas of urban development, mobility, landscaping, public space, architecture and participatory processes.